The Westhampton Congregational United Church of Christ is facing a $10,000 fine for being 100 days late with an elevator inspection, and so far the state has been unwilling to consider reducing or forgiving the penalty.

The church had the understanding that its elevator contractor would schedule and conduct the inspections when they were due as part of its service contract with the church. This system had always worked in the past, Pastor Tadd Allman-Morton said. However, the elevator's safety certificate expired on Nov. 30, 2013, and - unnoticed by the church - the company did not schedule an appointment to inspect it until March 10, 2014. 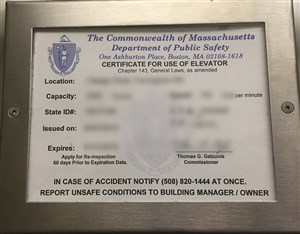 The church appealed the fine, arguing that the late scheduling of the inspection was an unintentional oversight. The church also argued that while the time period may have been 100 calendar days, the elevator is generally only used one day a week, so it's actual time in use with an expired certificate was 15 days. The church also argued that the fine is excessive, representing about 7 percent of the church's operating budget.

The state Department of Public Safety has rejected that initial appeal, so the church has now requested a hearing.

Allman-Morton said he hopes that state officials will take into consideration the church's belief that the elevator company was handling the inspections in a timely matter, and that the church is a volunteer run organization.

"Yes, they are within their legal rights to do this, but we feel it is unfair," Allman-Morton said. "This is our first time out of compliance and we received no warning that this would happen."

Allman-Morton said other churches should learn from Westhampton Congregational's experience.

"Churches need to be aware that even if their elevator company has agreed to take care of the scheduling it is still the responsibility of the church to be on top of it," Allman-Morton said.