Delegates Challenged to Be Brave and to Unbind

Delegates Challenged to Be Brave and to Unbind

It was hard to miss the theme of this year's Annual Meeting. There it was in huge, neon letters lined up at the back of the stage: Unbound.

The Meeting was bracketed by worship, with a service starting things off Friday night, a full communion service Saturday morning and a closing worship Saturday evening.

The services were woven around the story of Lazarus from John 11, where we hear of the grief surrounding the death of Lazarus, and of Jesus' reaction.

"I’m curious how Jesus felt when he got the news that his dear friend Lazarus was ill," said Rev. Sara D. Scott-Smith. Senior Minister of United Congregational Church of Bridgeport, CT.  "Oddly he did not rush to Lazarus’ bedside as we clergy are taught to do in seminary. Oddly he did not send greetings of comfort back to the sisters or put Lazarus on the prayer list as churches so often do."

In the Scripture, we hear how Jesus tells his followers to roll back the stone in front of Lazarus' tomb. They protest, his having been dead for four days. But they do as he asks. Jesus calls to Lazarus to wake up - and he emerges. Jesus then tells his followers: "unbind him, and let him go." 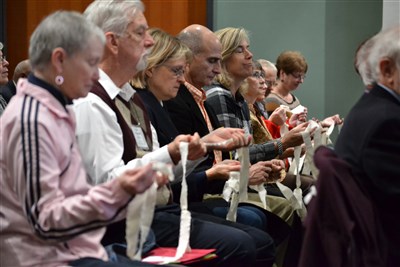 "Unbind him, and let him go. This is the holy work to which we are called," said Rev. Alison Buttrick Patton, Pastor of Saugatuck Congregational Church, UCC, in Westport, CT, in the call to worship Saturday morning. "This is the joyful task set before us by the risen Christ. No longer shall we be onlookers to death and destruction. No longer shall we be bystanders to bigotry or blight. Christ has called Love and Justice out of the tomb. It is up to us to unleash them in a world that yearns for healing and hope."

That morning, worshipers found strips of muslin cloth, knotted together, laid out in front of all the seats. As part of an unbinding prayer, they were invited to pick up the strips, breathe in, breathe out, and wrap them around their hands asking "how have I been bound?"  "Where have I participated in binding others?"  They were then invited to unwrap their hands, and feel the release. And then, to untie a knot.

"Beloved in Christ, these bindings are appropriate for the dead, but not for the living," Buttrick Patton said. "We are disciples of the living Christ, the one who came to proclaim Good News to the oppressed."

In his sermon on Saturday, Rev. Timoth Sylvia, Senior Minister of Newman Congregational Church, UCC, in Rumford, RI reflected on making a promise to his newly adopted, autistic son that he would help him break free from his own bounds. Over the years since, Sylvia said, he has learned that unbinding his son means something very different from what he first thought.

He talked of meeting with school staff to talk about goals for his son, one of them a vision of him making it to high school and having other kids say hi to him and high-five him - only to find out from the school administrators that this was already happening.

"Jacob has been submerged in incredibly supportive communities that are helping to unbind, layer upon layer of societal barriers, allowing him to then succeed," he said

"The idea of unbinding someone and participating in the very act that releases them from death to life,
literally/figuratively, it sounds good, right?" Sylvia asked. "It makes for a great illustration. And then the truth sinks in that we are actually called to do it." 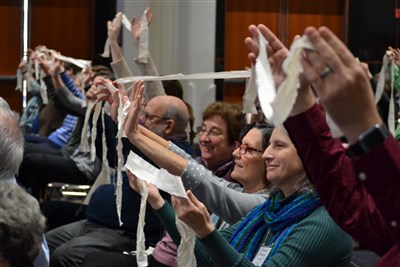 "We are the ones to do the unbinding," he said. "We will answer the call to unbind our schoolchildren forced to routinely practice active shooter drills. To unbind those held in poverty by unfair labor practices and predatory payday lending. To unbind those passed over for employment because of anything other than their ability to do the job. To unbind those daily affected by systemic racism, hatred and unsubstantiated fear of the other."

"As the Southern New England Conference of the United Church of Christ, we are blessed with an abundance of people dedicated to making the Gospel known, an abundance of people committed to showing the world a type of Christianity that is a lot more in line with that Gospel than what many in our communities are experiencing from others who also call themselves Christians," he said.

Scott-Smith called on participants to think about what it would look like to be brave and unbind.

"Just like the people gaping in amazement when Lazarus stumbled out into the light of new life, this resurrection of the church will stretch, bend -  and offend - the way we have always done church before.

This is why we must continually, earnestly, intentionally…  practice resurrection," she said.

Worship included a video with religious leaders answering the question "How would you charge the Southern New England Conference to respond to Jesus' command to unbind Lazarus?"
Video edited by Alex Shea Will.