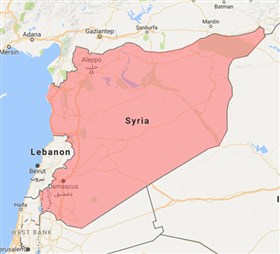 [Part 1 of this story was published on September 6]

MULITPLE TOWNS IN CT (9/07/2016) -- In the Southeast part of the state, a group of churches and ecumenical partners is busy preparing to receive a refugee family. The group has raised more that $7500 to help with housing costs. They have received a one-day training from Integrated Refugee & Immigrant Service (IRIS) on what it takes to help the family succeed as refugees in a new country. IRIS has granted them a "green light," meaning they are ready to go when the family arrives on September 14.

The normal challenge of securing housing on short notice has been extra challenging for this group as one of the refugee family members as Cerebral Palsy, creating special needs in their housing. But this isn't the only challenge facing this resettlement group. They asked not to be identified because there is concern about the safety of the family. Respectfully, we will refer to them as Southeast Resettlement.

Earlier this year, the group received a visit from the office of State Representative Joe Courtney asking them to be careful about giving the resettlement effort too much press. Rep. Courtney's office had received some negative responses to refugee efforts in the district.

This was the same concern that led Mark Hand, a member of Gilead Congregational Church's refugee resettlement team, to visit the local police station the day after his church received a Syrian family. Hand was relieved when the police told him they were not concerned. But Hand had already experience some negative reactions to the idea of refugee settling in the community. While trying to arrange housing for the family earlier this summer, Hand believed the group was near an agreement with a potential landlord until they mentioned the family was from Syria. The deal fell apart quite suddenly with a variety of excuses.

Having a concern for the safety and well-being of refugees is an important part of welcoming them to a community. Bob Wyss, a member of the QCRR group who attended IRIS's training, wrote about the experience in a Huffington Post article called Confessions Of A Refugee Anarchist. Wyss shared how disconcerting it was to see footage of refugee camps and recalled a point in the training when they were told not to ask refugees about their experience.

"They are already traumatized, repeating the horror may bring it back," wrote Wyss. "No one wants that."

Except for Mark Hand's suspicious experience with one landlord, none of the people interviewed for this story had witnessed any negative response to their efforts. Reviewing opinion letters in local newspapers reveals an overwhelming pro-refugee sentiment in the state. Yet, anti-refugee sentiment exists. In November 2015, 250 people gathered at the state Capital to rally in support of welcoming Syrian refugees. At the same time, 20 people marched on the governor's mansion to protest resettling Syrian families in the state. In December, the City Council of Norwich voted 4-3 to reject a proposal to join the White House's "Building Welcoming Communities Campaign," a project outlining a number of programs to foster improved services to immigrants. Critics claimed the town already had its "fair share" of immigrants, and that the plan would encourage more immigrants to settle in the town.

So what happens when a member of a church involved in resettlement efforts feels some anxiety about a refugee family in the community? One pastor involved in the Southeast Resettlement group said she would remind them that welcoming strangers is part of being a Christian.

"I would reiterate that welcoming the stranger and caring for the immigrant and the refugee is a foundational part of who we are as Christians and who we a called to be as people of faith," she explained.

So how do churches live into that call?

They can start by deciding how invested the congregation wishes to be in providing assistance to refugees throughout the world. If resettlement is an option, churches can contact Ashley Makar at IRIS to learn more about resettlement efforts and the commitment involved in becoming a co-sponsor group. Churches more inclined to help financially can give directly to local resettlement groups or partner agencies like IRIS. Churches and individuals can write to legislators asking them to support increased efforts to help mitigate the global refugee crisis. Immanuel Congregational Church in Hartford sent one such letter on August 29.

"For I was a stranger and you welcomed me," quotes Conference Minister the Rev. Kent J. Siladi. "The United Church of Christ uses the phrase, 'no matter who you are or where you are on life’s journey you are welcome here.' This is an expression of hospitality that is based in scripture and has been a part of who we have been as God’s people since the forming of the denomination in 1957."

"Our congregations are in the midst of every community in Connecticut and we strive to make an impact and a difference in the life of our communities. The Syrian refugee crisis is one such way so many in our congregations are exhibiting a welcome to those in need. This is not new behavior for our churches. We have been sponsoring refugees from across the globe in our churches literally for decades of time. It is the impulse of our hearts to reach out with God’s love to those in need. In a very tangible way providing a welcome gives us a way to live out the commandment of Jesus to love God and to love our neighbors. It’s that simple and its that important to remember that we are all connected."

That extravagant welcome was felt by Gilead's Syrian family in Manchester. Working through an interpreter, the father told Mark Hand, "If all Americans are like you, we know we will be happy here."

Drew Page is the News & Media Editor for the Connecticut Conference, UCC.