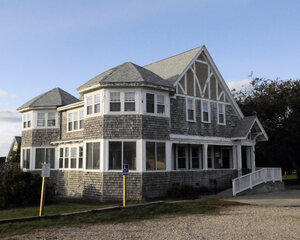 Craigville Village is celebrating its 150th Anniversary this summer and many special events are planned.

Founded in 1872, Craigville Village overlooks Nantucket Sound and Craigville Beach. A small village of 115 quaint cottages, it is home to the historic Craigville Tabernacle and the Craigville Retreat Center, which hosts religious and educational retreats and conferences throughout the year.

150 years ago, the village began as a collection of tent platforms built for the first camp meeting of the New England Convention of Christian Churches. The Christian Camp Meeting Association held its first “Big Sunday” on the grounds on July 29, 1872. Sixty-one ministers of the Christian Churches, as well as clergy and laity of several denominations participated in the first 10-day camp meeting. The historic Massachusetts Conference has a long history in partnership with Craigville. The anniversary summer pays tribute to the beginnings of this camp meeting and traces its evolution over time (Visit https://grasshopper-dory-nn45.squarespace.com/150th-anniversary-celebration) Among the highlights:

The Christian Camp Meeting Association invites you visit Craigville’s new website, www.craigville.org, to learn more about the village history and a recently compiled collection of historic photographs and vignettes of some of its founders and leaders. The website also provides a historic timeline of the village’s development from 1872 to today. A full calendar of anniversary events is also on the website.
Press inquiries may be directed to Bill McKinney, president of Christian Camp Meeting Association, at (508)280-5820  or by email: billmckinneymass@gmail.com