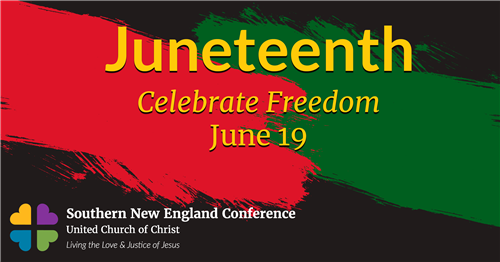 The Southern New England Conference is observing Juneteenth as a holiday, and giving the staff the day off on Friday June 18.

The move came as U.S. President Joe Biden and Vice President Kamala Harris were signing a bill into law to make June 19 a federal holiday, commemorating the end of the legal enslavement of Black Americans. The bill, which was overwhelmingly passed by both the US House and Senate, marks the day in 1865 when a Union general informed a group of enslaved people in Texas that they had been made free two years earlier by President Abraham Lincoln's Emancipation Proclamation.

"As a nation we have a long way to go, and yet making Juneteenth a federal holiday is a significant move toward national education and racial justice," said The Rev. Darrell Goodwin, Executive Conference Minister.

The Rev. Goodwin is being officially installed as Executive Conference Minister on Saturday, June 19, a day he selected intentionally to recognize the impact of the new Conference calling a person of African-American identity as its first leader.  (Go here to register for a Zoom link. )

A group of Rhode Island churches is calling on churches across the region and country to ring their bells to commemorate Juneteenth - read more here.

The national setting is holding a series of three events in recognition of Juneteenth. Read more here.