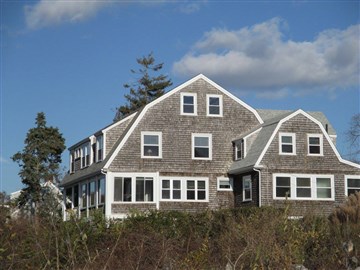 
One of two Massachusetts Conference-owned properties at the Craigville Retreat Center, Minnie’s Seaside Rest, has been sold to a private party for the asking price of $840,000.

Annual Meeting last year approved putting up for sale the two Craigville properties owned by the Conference, after the Conference Board of Directors decided not to continue leasing and managing the Craigville Retreat Center. The other house, which was used to house the retreat center director, is being prepared for market.

The Christian Camp Meeting Association owns most of the buildings that make up the Craigville Retreat Center, which had been operated by the Conference since 1960. United Camps, Conferences and Retreats took over management of the center on Jan. 1.

Minnie's Seaside Rest was a gift to the Conference from the UCC’s Wider Church Ministries, and it came with a restriction saying that if it was sold, proceeds were to be used to create a permanent endowment called the Minnie’s Seaside Rest Fund. The restriction states that the earnings from the fund will be used for “outreach ministries in accordance with the bylaws of the Conference.”

The Conference Board of Directors proposed to Annual Meeting last June that  most of the income from the Minnie’s Seaside Rest Endowment be used to support the Pastoral Excellence Program. In response to concerns raised at the meeting, the Board agreed that some of the proceeds may also go to support youth ministry initiatives.

“The original Minnie’s Seaside Rest was given to the Board for World Ministries as a place of respite for missionaries on leave from their overseas work. By making this home available to them, the wider church provided an opportunity for support and spiritual renewal to the men and women who were on the frontiers of evangelism and social justice,” said Associate Conference Minister Dawn Hammond.

“As Loren Mead and others have noted, the frontier of the Christian mission field is no longer overseas – it is right outside the doors of our churches. In many respects, our new front-line missionaries are the pastors in our own communities. Today, the wider church offers support and spiritual renewal via clergy communities of practice and clergy retreats. Therefore, I think it’s profoundly appropriate that the Minnie’s Seaside Rest endowment will help to fund this work,” she said.

The home – and now the Minnie’s Seaside Rest Endowment Fund – was named for Minnie Green. Minnie’s mother had prayed that her daughter would someday grow up to be a missionary. Tragically, Minnie died of influenza at age 7. In order to ensure her memory would live on, her mother gave her family’s Maine seaside home to the American Board for Foreign Missions, a predecessor to the UCC’s Wider Church Ministries.  When the house later fell into disrepair, the UCC Board sold it and bought a new Minnie’s Seaside Rest at Craigville. The Board later gave that property to the Massachusetts Conference.