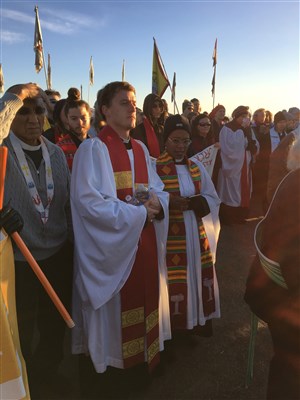 Eight Massachusetts Conference pastors joined fellow clergy in Cannonball, North Dakota last week to stand in solidarity with the Standing Rock Sioux Indians and against the Dakota Access Pipeline, which threatens the Standing Rock Reservation sacred lands and water. An estimated 524 clergy of 22 faith traditions participated in this action, including more than three dozen UCC pastors from across the country.

The call for clergy to gather came just days before the action date of Nov. 5, and proved a draw not only because of the potentially grave environmental impact the pipeline would have on local drinking water, but also for the racial justice and human rights issues. Clergy gathered at the Aceti Sakowin camp on the banks of the Missouri River to share prayers and songs and march together in support of the Native American protesters.

John Edgerton, Associate Pastor of Old South Church in Boston, reports:
“We learned about the roots of the Sioux nation's claim on the area as sacred land. Dating to a centuries old war, the site where the pipeline would cross goes through a battlefield where hundreds died in an intentionally set prairie grass blaze. The survivors of that battle jumped into the water to escape the flame, but not without being badly burned. The descendants of those survivors are known as the Burnt Thigh People to this day, in memory of the tragic loss of life.
Imagine a pipeline being built through the Gettysburg Battlefield, or the field in which Flight 93 crashed. It would be unthinkable, a desecration of the sacred in service of the practical.

Our UCC clergy participated in a ceremony during which a copy of the Doctrine of Discovery was symbolically burned. The Doctrine of Discovery came out of the idea that European entities should be allowed to seize lands inhabited by indigenous peoples under the guise of discovery. The United Church of Christ, as a denomination, repudiated the document during Synod 29. Read the resolution here.  Read a blog about the ceremony by Rev. Edgerton.

When asked what we can do to support the Standing Rock Sioux in their fight against the pipeline, our clergy were told to ask our faith communities to write to President Obama; the Sioux are asking for the pipeline construction to be halted or redirected. You can email the president at president@whitehouse.gov.

We close with a night prayer by William Burhans, pastor of the First Congregational Church in Winchester, MA, written for the people of Standing Rock (adapted from the Book of Common Prayer). Also please see links to additional stories below.

Watch Dear Lord with your Water Protectors this night;
with those who work, watch, wait, weep or protest;

And give your angels charge over those who sleep,
in tent, teepee or yurt, beside the sacred fire and beneath the sacred stars. 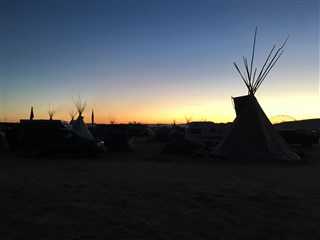 Tend the scared ones, Lord Christ,
Give rest to the weary,
Strengthen the hopeless,
Bless the resolute,
Shield the faithful,
Soothe the scarred earth,
Protect the water of life,
Convert the hearts of the pipeline builders.

In Your mercy, make a way for the Water Protectors
where there seems to be none.

Guide them waking and guard them sleeping,
that awake they may resist the powers that threaten your creation
and asleep they may rest in the Power that grants them - and the earth - peace.
Amen.

​Read a blog by Lise Sparrow on her experience and insights at Standing Rock. Lise is pastor of Guilford Community Church, UCC in Vermont.
Photos on this page also by Lise Sparrow.

Read a story on the UCC clergy at Standing Rock on the UCC website here.