Churches Respond to Halt On Refugees

Churches Respond to Halt On Refugees 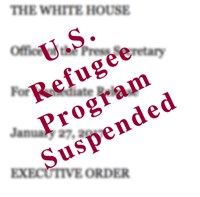 Editor's Update (Feb.6): A federal judge has suspended the executive order (see below). Spring Glen Church has just received word that their refugee family will be arriving Feb. 6.
HAMDEN – For Spring Glen Church in Hamden, supporting refugees is a ministry that dates back to the Amistad trial. But President Trump's recent ban on immigration from several predominantly Muslim countries has put an indefinite hold on the church's plans to help yet another immigrant family.

The Spring Glen congregation has been involved in refugee resettlement for decades. They have a long-standing relationship with Integrated Refugee & Immigrant Services (IRIS) in New Haven and have resettled refugee families twice in the past. But the push to settle another family did not come from the church, according to Senior Pastor Jack Perkins Davidson.

"Members of the Spring Glen neighborhood gathered through social media and were looking to take positive action in the wake of the… election," said Davidson. "They reached out to local churches looking for partners."

The community connection intrigued Davidson and others in the congregation. Soon, the church was helping raise money to sponsor a family. But word had already been released that the Trump Administration was planning to put a halt on immigration travel.

"We knew were were under the clock for trying to settle a family," said Davidson.

The community partnership began an online fund to raise the required amount recommended by IRIS. In 24 hours, they collected over $7,000. They quickly raised their goal to $10,000, which they met in the next 24 hours.

During that second day, they received word from IRIS that a family was assigned to their group: a grandmother, a mother, and a daughter. The family was coming to reconnect with relatives already in the United States. It had been a whirlwind 48 hours.

The Spring Glen group learned that the that all refugee resettlement travel was to be halted by Feb. 3.  Their family was supposed to arrive on Feb. 7.

Davidson said the news was "disheartening" to the community because "there is so much trauma going on and there were people ready to help who we not being allowed to help." But they remained positive. The group met recently to discuss their next steps. They discussed supporting other nearby groups with families already in place, working on education efforts, and looking at what it means to be advocates for refugees.

The Spring Glen church is not the alone in searching for what advocacy looks like in the wake of the new policy. In Middletown, youth from a local mosque organized an interfaith gathering to fuel conversations and fellowship. Youth from many UCC churches responded and as many as 100 hundred youth attended the event held at Frist Church of Christ, Congregational of Middletown. The Middletown Refugee Resettlement Coalition, a group that has resettled one family but had a goal of resettling 2 more, met with lawyers at Wesleyan to see what actions were possible. Rev. Julia Hendrickson Burkey, senior pastor of First Church of Christ, says folks there are "ready and willing to take action, to resist or make change" to the executive orders. Burkey says she has begun researching the Sanctuary movement to see what role churches could have in protecting refugees. [Separately, a bill has been proposed in the Connecticut legislature to establish the state as an "Sanctuary state."]