Chile: Stories of Hope and Resilience

Chile: Stories of Hope and Resilience

By The Rev. Christopher Ney

Before beginning her presentation, she arranged the items carefully on a table: a handwoven tapestry from Paraguay, a simple pack of gum, two homemade dolls, a bouquet of paper flowers, a coffee mug and more. Each object served as a prompt for a story. She began by telling the story of the Paraguayan artisanal work and the careful practice of knotting cords together to form the beautiful weaving. Then she invited anyone in the audience to choose another item from the table and she would tell its story. 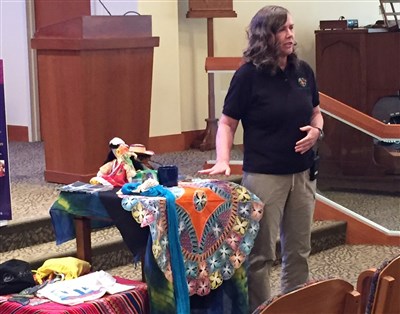 Elena Huegel is a story teller. With this simple technique, she modeled some of what she learned from her years of service with the Pentecostal Church of Chile—trusting in the presence of the Holy Spirit to ensure that the right stories were shared at each location. With support from the Chile Partnership Committee, and schedule coordination by Beverly Prestwood-Taylor, Elena traveled around Massachusetts telling stories about her work in Chile and Latin America during the first two weeks of September.

In recent years, her work has focused on the Shalom Center, a peace and environmental education and outdoor ministry center of the Pentecostal Church of Chile. The Massachusetts Conference has played an important role in the development of the Shalom Center and has taken youth delegations to Chile to help build the center and to provide an opportunity for cross-cultural immersion and faith development. One of the goals of any missionary is to work oneself out of a job and Elena has done that by transitioning the leadership of the Shalom Center into the hands of Chileans from the IPC.

Listening for the Movement of the Spirit

Having completed her service in Chile, Elena has spent the last nine months visiting churches in the United States to share the good news of the work of Global Missions. Here in Massachusetts, she spoke at churches, colleges and seminaries, and a retirement community. Along the way, she visited with old friends, gathered with individuals who had visited the Shalom Center, and met new people who were hearing about Chile and Global Ministries for the first time.  Elena explained that she developed the interactive story-telling method as a way of keeping her presentations fresh after so many months on the road. But the technique also reflected her time with Chilean Pentecostals— listening for the movement of the Spirit and responding in a way that connects with other people and builds community.

Some of Elena’s most poignant stories came from the work of recovery following the earthquake of February 2010. One of the strongest ever recorded anywhere, the Chilean quake and tsunami devastated towns and cities along the coast. Some communities were nearly completely flattened by the shaking of the earth or wiped away by the flood waters. Elena expressed special concern for the children whose lives were disrupted by the earthquake, so she asked the women of the IPC in Tome, another city which suffered greatly from the natural disaster, to create Esperanza dolls to give to children.

In many of her presentations, Elena introduced people in Massachusetts to these dolls. Esperanza is the Spanish word for hope. The dolls offer hope because they are very good at giving and receiving hugs. They are also very good at listening and keeping secrets. For children in Chile, the dolls offer a sense of safety and comfort and the assurance that someone will hear their greatest fears and concerns.

The message of hope radiated out from the Pentecostal Church of Chile into the larger community. A public school teacher who is a member of the Pentecostal Church of Chile brought the dolls to her elementary class room and told her students that they were available at any time to hug or listen to their stories. One day, the teacher lost her patience with one student who often acted out and disrupted the class. In frustration, she placed an Esperanza doll on the student’s desk and told him to play with the doll because she was tired of his disruption. The boy began to tug and pull at the dolls arms and legs and hair.

As the teacher watched from the corner of her eye, she saw that the boy eventually began to hug the doll and whisper in its ear. The teacher never learned what the boy told the Esperanza doll, but from that day forward, his attitude changed and he became a leader in modelling good behavior and academic success in the classroom. This past year, the teacher attended his 8th grade graduation and learned that he has been accepted to a good high school.

Elena’s presence in Massachusetts has been a reminder of the long-standing relationships between the MACUCC and the IPC and our ongoing work in support of youth delegations and the ministry of the Shalom Center. Many of Elena’s stories have been recorded in her book, The Earless Man from Chile, which was published by The Chalice Press and is available from Global Ministries and local book sellers. She begins a new Global Ministries assignment in Chiapas, Mexico but she will continue to relate to the Massachusetts Conference.

NOTE: From February 18-28 2017, a youth delegation from UCC churches across Massachusetts will visit Chile and the Shalom Center. Space is limited. If you are interested, please contact The Rev. Christopher Ney at chris@centralnewburyport.org.