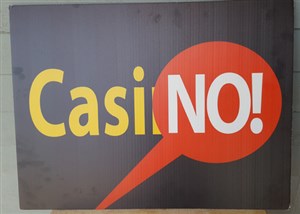 EAST WINDSOR — The Coalition Against Casino Expansion in Connecticut is mobilizing in East Windsor after the state's Mashantucket Pequot and Mohegan tribes selected the town on January 24 for a potential new casino. Residents opposed to a new casino have joined with the Coalition to request a public referendum where voters can voice their opinion on the development.

According to Michele Mudrick, Director of the Coalition and Legislative Advocate for the Connecticut Conference UCC, one of the 12 member organizations, the Public and Security Committee of the CT General Assembly met on January 23 for a hearing on casino expansion. Several members of the coalition requested time to speak at the meeting, but were denied by committee leaders. The next day, the tribes announced the selection of East Windsor for a proposed casino.

East Windsor does not require any public referendum to approve the development of a new casino, but it did require a public hearing. Less than 26 hours after the tribes' announcement, a hearing was held at the town high school. Mudrick said very few people were able to attend this Saturday afternoon meeting due to the very short notice. Longer notice would have allowed those opposed to the new casino a change to voice their concerns over the social and economic costs of the expansion.

"According to the latest research, convenience casinos drain wealth from communities, weaken nearby businesses, hurt property values and reduce volunteerism, civic participation, family stability, and other forms of social capital that are at the heart of a successful community," said Mudrick. "It is the height of irresponsibility for town leaders to deny residents the opportunity to vote on whether they want a casino in East Windsor."

Mudrick and the Coalition are not done fighting.

With the help of town residents and business owners, a petition has started to request a public referendum. The goal is to raise 250 signatures to submit to the East Windsor Board of Selectmen in the hopes that this number would be high enough to convince town leaders that the residents' voices need to be heard. Even if a referendum is called, Mudrick says the results would not likely be binding.

"If there is a referendum, and the vote comes out that the residents of East Windsor do not want the casino, it will be much more difficult to get the CT Legislature to approve [the new casino]," said Mudrick.

The Coalition will host an informational forum on Monday, March 6 at 7:00 pm at East Windsor High School to discuss the social and economic costs of a casino in East Windsor. Organizers are encouraging East Windsor town residents to attend the meeting.

Mudrick also encourages people to call their State Representative and State Senator to voice their opinion on the expansion of casinos in the state. She says calling is more effective that emailing and even suggests residents ask for an in-person meeting with their legislator. If a meeting is arrange, Mudrick asks people to contact her at michelem@ctucc.org.

The CT Conference adopted a resolution in 1994 calling for its "encourage our churches and members to oppose casino gambling in the State of Connecticut."