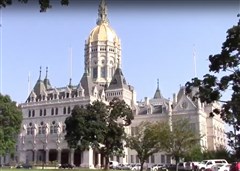 In early morning voting Wednesday, state Representatives passed a bill that outlines a path for the Mashantucket Pequot and Mohegan tribes to build a new casino in East Windsor. The bill passed 103-46 in favor of the casino. The bill, which was opposed by the Connecticut Conference, now heads to Governor Dannel Malloy's desk to be signed.

The Connecticut Conference's Legislative Advocate Michele Mudrick has fought any expansion of casino gambling in our state, guided by existing Conference resolutions against gambling. She expressed frustration at the outcome of the vote, but did share that she and other advocates succeeded in convincing legislators to propose an amendment to the bill that would have allowed East Windsor residents to hold a referendum. That amendment failed late last night.

"That was so irresponsible," she said. "For legislators to reject an amendment giving East Windsor residents a voice in the process was immoral."

Mudrick has been leading the fight against casino expansion in the state by organizing groups and other denominations to join forces to oppose any casino legislation. She helped found The Coalition Against Casino Expansion in Connecticut, a group of 13 faith and ecumenical groups opposed to gambling., including the CT Conference. 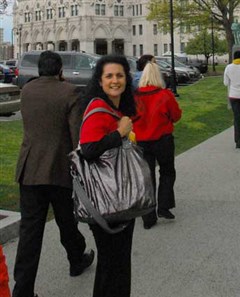 The Coalition has worked to educate and inform legislators and residents since early last year. When an announcement was made in January of this year that the tribes had chosen East Windsor as the site for a new casino, the Coalition moved quickly to petition the town for a referendum in order to allow the citizens of the rural town a voice in the decision. A town meeting in April voted 198-112 to reject an ordinance that would have required a referendum. East Windsor's Board of Selectmen had already approved the casino in February.

An East Windsor casino is not a foregone conclusion at this time. Even if the Governor signs the bill, there will be several legal obstacles to come. MGM Resorts International has fought the casino for two years in order to prevent a loss of the gambling market once its new gaming resort opens in Springfield next year. The corporation has signaled its intent to challenge the legislation as a violation of the Equal Protection and Commerce clauses of the U.S. Constitution.

Despite a disappointing outcome, Connecticut Conference Minister the Rev. Kent J. Siladi praised the efforts of Mudrick in opposing casino expansion. "We are disappointed to see that CT lawmakers approved a Casino in East Windsor," said Siladi.  "We have been working diligently to oppose this action through our Legislative Advocate, Michele Mudrick.  We are grateful to Michele for her tireless work in assembling a coalition of people of faith from across the state to lead our anti-casino efforts.   We do not believe that another casino is wise for our state and we will continue to lift our voices regarding what might well be further expansion of gambling in our state. "