An annual Homecoming celebration, a beloved location, and a “new” twist on an old sacrament combined for a unique and deeply moving occasion for the congregation of Mattapoisett Congregational Church a few months ago, when two boys were baptized in Mattapoisett Harbor.

Like most congregational churches, the Mattapoisett church typically baptizes infants in the sanctuary during worship, using a baptismal font. A kneeler is used in addition to the font for older children or adults. This past September, however, the setting was a small beach near Ned’s Point Lighthouse off Buzzard’s Bay.

Seeds for the harbor baptisms were planted about two years ago when Rev. Lignitz Harken heard that parents of a young boy wanted him baptized out-of-doors.  In the end, the family wasn’t ready for that important step, at least not then. But when another set of parents came forward last summer, things began taking shape.

“The logical time and place would be Homecoming, when the congregation worships outside, at the lighthouse,” said Rev. Amy Lignitz Harken, pastor of the church.  For many years, homecoming has signaled the end of summer as the worship time returns to its usual 10 a.m., and the choir returns from its summer hiatus. People stay late for a cookout and Sunday school sign-ups. This year, everyone was invited to come early to witness the ocean baptisms, the first in living memory of the congregation.

Rev. Lignitz Harken has much experience in immersion baptisms, having been ordained in the Christian Church (Disciples of Christ), and having served DOC churches. The DOC practices “believer’s baptism” by immersion. Generally, infants and very young children are “dedicated,” while older children and adults are baptized by immersion when they claim belief and acceptance of Jesus as savior. DOC churches are typically constructed with baptisteries, often behind the pulpit. 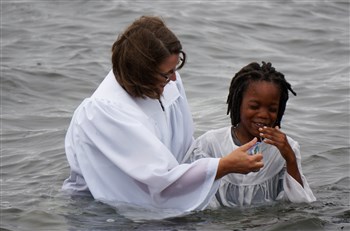 “Immersion is the way I have typically baptized children and adults,” Rev. Lignitz Harken said. “It isn’t the customary way for most people in Mattapoisett, but they were eager to support and witness something a little different. Also, the fact that I had experience with immersion baptisms brought a degree of comfort to a situation which was, for many, new.”

Because this was a first for the church, several things had to be created. Rev. Lignitz Harken composed a brief curriculum for the boys, who are in the 2nd and 3rd grades, touching on several facets of baptism and the Christian faith. A skilled seamstress in the congregation graciously agreed to sew the boys’ robes and alter the baptism robe ordered by the minister. As the time grew near, the tide table was consulted, a solid sandy spot was staked out, town officials were notified, and a strong volunteer was chosen to be on hand if help were needed.

On baptism day, as Henry and Elliott’s proud parents helped them don their robes, and Rev. Lignitz Harken pulled on borrowed waders. Church members began arriving at the small beach. After speaking generally about baptism, and more specifically about the boys, Rev. Lignitz Harken asked questions of the boys, their parents, and their sponsors, guided by the UCC Book of Worship. As the congregation sang a simple “Amen” chorus on the shore, a deacon helped each boy out to the baptism site. After affirming the final question from the pastor, each boy took a deep breath. Rev. Lignitz Harken covered their nose and mouth with a handkerchief, and dunked them backwards.

Since the baptisms, the congregation has continued to talk about the event as something special, memorable, and meaningful.

Editor's Note:  Scroll down for some tips in conducting an immersion baptism.

Rev. Amy Lignitz Harken can be contacted at the church office at 508.758.2671 or email mattcong@verizon.net.  For tips on holding a successful, memorable, immersion baptism, read below.  You can also discover what immersion baptisms mean to Amy in her blog article.