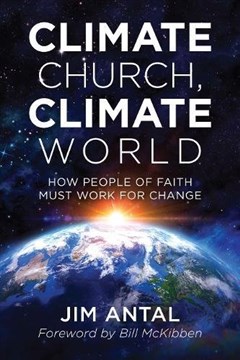 
Massachusetts Conference Minister and President Jim Antal's new book, "Climate Church, Climate World" is garnering attention outside of traditional church settings, most recently in an article in the Chicago Tribune.

"Do you believe in God? Then you have a moral duty to fight climate change, writes Jim Antal" is the headline on the Chicago Tribune article, which outlines Antal's argument that Americans are failing to address climate change because it is such a long-term problem.

Antal's book not only explores the details of the current climate crisis and our lack of response, it is also a clarion call on people of faith to be the solution.

"Only a repurposed church (and synagogue, mosque and temple) will be able to inspire the fundamental changes humanity must embrace if we are to restore the continuity of God's great gift of creation," he says.

In the book, subtitled "How People of Faith Must Work for Change," Antal writes: "“Here in America, if Christianity continues to emphasize personal salvation while ignoring collective salvation, if we continue to reduce the Creator to an anthropocentric projection who privileges and protects humanity, however alienated we may be from God’s created order, then the practice of religion will continue to diminish and it will add little to the redemption of creation.”

Antal is the national spokesman for climate change for the United Church of Christ, is a political activist on the issue, and has spoken at gatherings of both religious leaders and scientists on the topic. He has recently spoken about the book at a number of churches in the area, as well as the BU School of Theology, Yale Divinity School and the Rhode Island Interfaith Power and Light annual meeting.

Even before his book was published earlier this spring, it gained the attention of notable activists from outside of the church.

"Jim Antal is among the most knowledgeable and passionate advocates of Creation Care, and he captures the complete story in Climate Church, Climate World," wrote Dr. James Hansen, director of the Climate Science, Awareness, and Solutions Program for the Columbia University Earth Institute.

And Michael Brune, executive director of the Sierra Club, writes: "Even more than an environmental problem, climate change is humanity's greatest collective moral crisis, and no one understands that better than Reverend Jim Antal ... To people of faith - lay or clergy - who are seeking ways to engage on this great global challenge: Here is your guide."

Following each chapter of the book there are discussion questions aimed at prompting readers to engage in their communities through everything from Bible study to civil disobedience. There are also more than 50 sermon suggestions.

"This is the book for which we have been waiting concerning the climate crisis!" writes Walter Brueggemann of the Columbia Theological Seminary. I"t is clear… It is bold… It is institutionally realistic: this is no generic moral appeal, but a bid to the church to take up its primal mission… a welcome must read.”

Find out more at www.climatechurch.org .