Antal, Other Religious Leaders "Take a Knee" for Climate Change

Antal, Other Religious Leaders "Take a Knee" for Climate Change 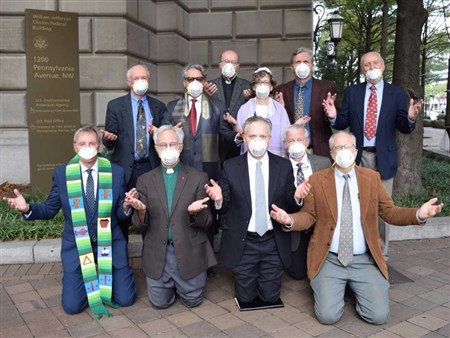 WASHINGTON, DC -- The Rev. Dr. James Antal was one of a dozen religious leaders of Protestant, Catholic, Evangelical and Jewish traditions who gathered at the EPA today to "take a knee" in prayer and urge the current administration to address global climate change.

The Rev. Dr. Antal, who serves as the national spokesperson for the United Church of Christ in addition to heading the Massachusetts Conference, presented a statement to the EPA (read it here). He reports that in June 2017, 97% of the delegates to the National Synod of the UCC voted “to resist all expansion of fossil fuel infrastructure and demand new sources of renewable energy that are accessible to all communities.“

These religious leaders requested a meeting with the EPA, saying that standards enacted to protect people from harmful chemicals, air pollution and the worst impacts of climate change are being rolled back at an alarming rate. During this meeting -- and afterward at the EPA main entrance -- they urged EPA Administrator Scott Pruitt and his staff to consider the moral implications of ignoring climate change science and a wide range of environmental challenges facing the nation from polluted air and drinking water to the degradation of public land and protected waterways.

“For the sake of our children, grandchildren and unborn generations, we ask you to hear us -- as representatives of tens of millions of people of faith, all of whom are stakeholders in the EPA and in God’s creation – hear us," Antal said. "Enforce policies and promote innovation that will allow the next generation to at least forgive us for what we and a few generations before us have already caused.  Overcome the false and destructive divide that dominates climate policy and conversation, and refocus this nation on providing the next generation with what is their Constitutional right to inherit a world not wrecked by climate change.”