by the Rev. Allie Perry, allie.perry@gmail.com 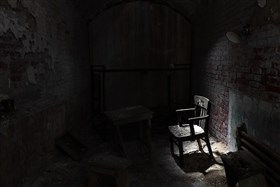 In May 2019 at the historic Connecticut Conference’s last Annual Meeting, we took a clear stand, denouncing the human rights abuse and harms of solitary confinement.  We unanimously passed the resolution of implementation entitled: End the Practice of Prolonged Solitary Confinement in Connecticut Prisons and Jails.  With that resolution we committed ourselves as people of faith to advocate for the end of the practice through CT’s prisons and jails.

NOW is the time for advocacy. So what can you do? Why is this important?  Why does this matter?
Solitary confinement, in excess of 15 days, is considered torture. In the name of “correction,” to the contrary it constitutes a human rights abuse which degrades, dehumanizes, and brutalizes those who have been incarcerated, defiling their inherent, and God-given, dignity.

The Quakers introduced solitary confinement into the U.S., believing that individuals needed solitude in order to repent of their crimes. In 1829 Eastern State Penitentiary was built in Philadelphia solely with solitary cells. The Quakers were horrified by what they had wrought and eschewed the practice.  Despite the harms it causes, the practice has persisted, and continues to be used through much of the country, including in CT prisons.

Its harms are indeed horrifying.  As Supreme Court Justice Anthony Kennedy wrote in a 2015 opinion, solitary “exacts a terrible price,” bringing people “to the edge of madness, perhaps to madness itself.” It is costly in human lives.  Most people who are held in solitary eventually return to their communities, all too often psychologically damaged and traumatized as a result. It is also costly in taxpayers’ dollars because of the ratio of staff to incarcerated persons.

As Michelle Alexander documents in her book The New Jim Crow, mass incarceration is a racist system. Solitary confinement exemplifies that in the extreme. 85% of those currently incarcerated in Northern Correction Institution, CT’s supermax (exclusively solitary cells) prison are black and brown people.

The good news is that there is now a growing movement across the country to end solitary confinement. Colorado abolished the practice a couple of years ago and as a result has seen an 85% reduction in violence in their prisons. In 2019 New Jersey passed legislation to end it. And just now New York passed the HALT (Humane Alternatives to Long Term Confinement) bill.

ACT NOW
This is the time for CT to end this barbaric, cruel and currently all too usual punishment. I urge you all to let your legislators know that you care about human rights. For the sake of the humanity of those incarcerated, the humanity of correctional staff, and the humanity of us all, urge them to end to this form of torture.  Urge them to vote in favor of SB #1059.

Rev. Allie Perry and SNEUCC Legislative Advocate Michele Mudrick are working on this legislative action together.  Photo by Spencer Tamichi on Unsplash