Advent Around The Conference

Advent Around The Conference

12/20/2017 - by: Drew Page - Church Innovation
Share
The season of Advent is a busy time of year for a church. Many churches find their pews a bit more crowded in the weeks leading to Christmas. This year, churches around the Connecticut Conference will hold dozens of pageants, both modern and traditional, as well as holiday concerts featuring local artists, famous musicians, and quite a few bell and chime choirs. There have been afternoons and evenings of caroling, dinners held in the classic style of Victorian England, and holiday fairs. For those in need of healing, many churches have added Blue Christmas services of Healing to their schedules as well. Finally, hundreds of collections in every corner of the state have raised money, clothing, and toys for those individuals and families who need support during the holidays.

Here are some rather unique Advent activities we heard of this season:

West Suffield Congregational Church
West Suffield partnered with the Suffield Interfaith Council to host Mary in The Bible And Maryam In The Qu'ran: An Evening Of Reflection On The Mother Of Jesus, A Role Model For Christians And Muslims Alike. Recognizing that Jesus calls us to be neighbors to all people, the people in Suffield brought neighbors together to learn more about the ways Jesus' mother is respected in both Christianity and Islam.

Hopeville Church (Waterbury)
Wassailing, an old Yuletide tradition of traveling door to door, singing to people and drinking to their health, has inspired many caroling adventures. Folks in Waterbury are bringing wassailing back through a Christmas Carol Pub Crawl. During the two-hour event scheduled for December 22, they will visit four downtown pubs, sing Christmas songs, and raise a glass to toast one another and all those they meet on the way. 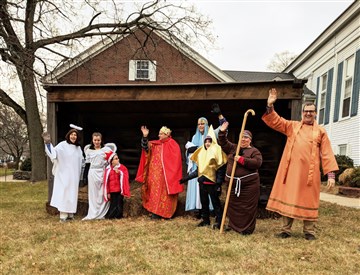 Wapping Community Church (South Windsor)
On December 3rd, members of the Wapping church volunteered to spend a portion of the afternoon in a living crèche. Costumed as May, Joseph, the shepherds, and even some of the animals in the stable, folks represented the nativity scene in person for over two hours, waving to passers-by in the busy center of Wapping.

On December 17, members of Wapping's Sacred Dance Group, a group of dancers age 5-17 led by youth members of the church, performed to a Pentatonix rendition of Hark the Harold Angels Sing. Clad in holiday green and red, this group added a high-energy recital to their regular Sunday service. 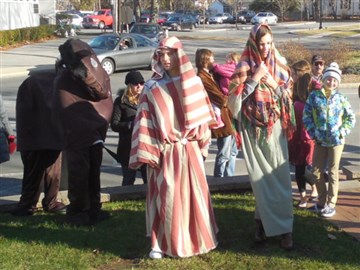 Deep River Congregational Church
On December 10th, members of the Deep River church took the Christmas narrative to the streets in the annual Las Posadas Christmas Procession, walking down Main Street dressed as Mary, Joseph, and an entourage, including a donkey. They knocked on doors, asking if there was any room for Mary and Joseph. They even sang up and down the aisles of a downtown grocery store, bringing Christmas literally to the community's door.