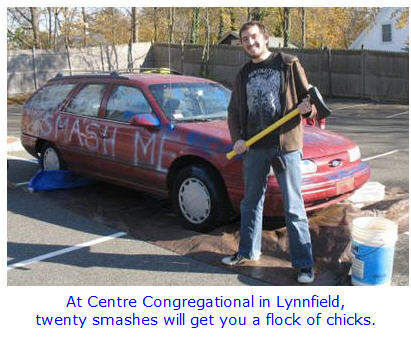 Centre Congregational Church, UCC, in Lynnfield has been supporting Heifer International for many years - so many years in fact that they consider the partnership as part of their identity.
Like many churches who support Heifer, Centre Congregational members watch the Heifer videos, make posters, put announcements in their bulletins, collect money for donations, get the Sunday school children involved, and hold a Heifer Market alternative giving opportunity.  These efforts help raise awareness of how 'purchasing' animals -- such as chicks, bees, goats, or sheep -- gives families a hand-up, not just a hand-out, and empowers them to turn lives of hunger and poverty into self-reliance and optimism.  Heifer's mission, which includes a promise from the recipient to give one of its animal's offspring to another family in need ("Passing on the Gift") creates an ever-expanding network of hope and peace.
James Langill, now a freshman at UMass Amherst, suggested a special event to raise funds for Heifer.  He had a car that was inoperable, couldn't pass inspection, and he needed to get rid of it.  Instead of donating it to one of those car donation charities heard on the radio, he decided he would rather raise some funds for one of his favorite organizations.  The Car Smash fundraiser was born.  Armed with safety goggles, gloves, an ax, and signed liability waiver forms, members could spend a dollar per swing and smash the car to relieve frustration.  Two hundred fifty dollars later, the car was towed to a junkyard and enough money was raised to purchase a water buffalo. 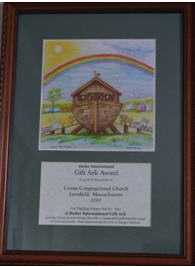 The Car event wasn't the only 'smashing' item related to Heifer.  The day of the church's Heifer Market started with a presentation of the church's latest Ark award, given in appreciation of the congregation's ongoing support of Heifer's work.  Each Ark award represents a donation of $5,000 or more. This year's award was particularly special because two artists from the church, Allie Parker and Carol MacKendrick, created the design featured on the plaque.  Since 2004, the church has received ten Ark awards, using up all of the designs available from Heifer headquarters.  So, Allie and Carol worked together to create a beautiful new design using the existing awards as their inspiration.

Church members expressed appreciation for the time, thought, and care evident in the beautiful Ark award that the pair created. Pastor Rev. Dennis Bailey wrote:  "Thank you for the beautiful picture you made for the Heifer Ark award!  Such detail in the picture, so finely done, a professional job, and to think that two people from our own church did it!  I am so proud.  Thanks be to God for the generosity of the people of Centre Congregational Church to think of others through Heifer.  Thanks be to God for the artists among us who have created such a special Ark award!"
"We are a church about a lot of things but this is one of the more important items," explained Outreach Team member Sandi Watson. The support started in the 1950s when Rev. Andy Richards, a one-time Seagoing Cowboy, became pastor of Centre Church.  His descriptions of the trips overseas to deliver animals and his passion for Heifer's mission inspired the congregation.  (Now Heifer purchases animals locally.)  "The older members are especially supportive because they believe they are leaving a legacy," she said.  "For younger kids it's a program that is tangible; they can relate to animals and how they can be beneficial to people through milk and egg production, and wool."
Langill said he had selected Heifer to receive the money he raised because while he was growing up in the church, the Ark awards displayed in the church narthex "made me proud to be part of the church."
With these special contributions from Allie, Carol, James, and other members of Centre Congregational, it seems Heifer is not the only one 'passing on the gift' and helping to expand a network of hope and peace -- even if it means an old car will get hurt in the process.
Sandi Watson can be reached at the church office at (781) 334-3050 or Office@Centre-Church.org.