Given that it was nearly a year ago that a devastating earthquake hit Japan -- causing a tsunami that left thousands of people dead or missing, and causing concerns about a nuclear disaster -- it's a good time to spotlight the events held by the United Church of Christ, Congregational, Boxborough in support of the Japan Tsunami relief effort.

"As were many others, I was very touched by the disaster that struck Japan on March 11, 2011 and the days that followed," said Jennifer Royce, a member and Chair of the Stewardship Committee of the church. "About 40 of our church members were gathered at a scheduled church planning meeting on March 13th. We were focusing on our future as part of our interim time and doing an Asset Mapping exercise to determine our goals and mission dreams. At the end of the exercise, as we stood in about six separate groups based on our interests, our interim minister Rev. Wendy (Miller Olapade) took the exercise one step further. She asked what we might be able to do if we were to combine the energies of the people who wanted to do a hands-on mission project, the people who wanted to do meals for the community, and the people who were interested in expanding our spiritual practices." 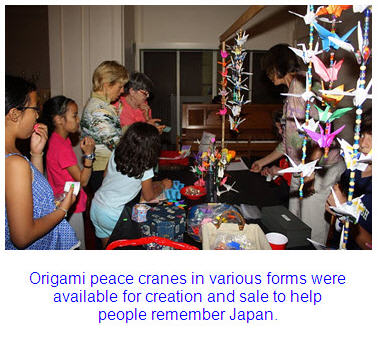 Someone then voiced a desire to do something to help Japan. The church had held very successful events to benefit the victims of Hurricane Katrina and the Haiti earthquake, so it seemed quite natural to pool their resources and create something to help the people of Japan. "Rev. Wendy invited those who could commit to creating an educational fundraiser to join her in the middle of the room and there were 20 people charged up to make it happen," said Royce.

Associate Pastor Rev. Susie Allen and other church leaders organized a Prayer Vigil on March 18th for Japan, and the planning for the fundraiser event started after the vigil. One church member, whose mother and sister live 40 miles north of the nuclear reactors, shared their struggles, fears, and concerns about the future and helped to put a face on the experience. She and other local women from Japan helped shape all of the planned activities.

The church's goal was to provide a free community event that gathered all ages to come together and experience some aspects of the Japanese spirit and culture while raising funds for those in need. The "Celebrate Japan" event was held in June and over $5,000 was raised to support the survivors. All proceeds went to organizations directly involved in the Japan relief efforts and who provide long-term support for those affected in Japan: the Japan-specific efforts of UCC Global Ministries, Habitat for Humanity and Save the Children.

Miller Olapade, was quite moved by the experience. "It is difficult for me to describe what it felt like the day of the event. There were things going on all over the property and so many people came who were from outside of the church body, yet it was peaceful and prayerful throughout the day. It was as if everyone knew we had entered a temple and something important was happening. Even though we had lots of kids and an ongoing silent auction, and 8-10 Taiko Drums pounding away in our sanctuary, there was a hush about the day. It seemed to me, that for that one day, we were able to wear the kind of quiet grace that one often experiences from Japanese people. What a blessing it was to experience."

Another very rewarding aspect of the event was the manner in which it just blossomed from that Asset Mapping meeting. According to Miller Olapade, it was not hard to make it happen, and there was no strain on the congregation or pushing required. "It was a beautiful representation of the energy and passion that comes from a community who shares a mission and allows creativity and commitment to that shared goal overflow into something more than they had imagined," she said. 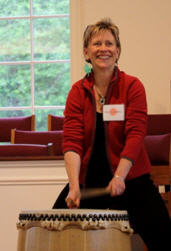 Some of the elder women in the church learned to make origami cranes, and by the time the event took place, there were peace cranes hanging from every window in the sanctuary. In addition, there were enough to offer all kinds of cranes as art and décor for sale at the event. One elder woman who was recently widowed, discovered a crane folding calling and a new spiritual practice that she reports led to a shift in her spirit.

The paper cranes made an even more spiritual impact. During the prayer vigil that preceded the event, participants were invited to write prayers on Origami paper and the church member from Japan folded the prayers into cranes. "The sound of her folding during the silence was breathtaking," said Miller Olapade.   The member noticed one prayer had been written in Japanese and during the time that ensued, sought the guest who had done so, and developed a connection that had not before existed. "This connection ended up being a total blessing to the event, as the woman who had come to pray, brought about ten other Japanese women and children who cooked and presented a 'Japanese Café' with authentic foods for sale. They also taught language and art, and helped to make the event multi-faceted."

In addition to the cranes and food, there were a silent auction of Japanese and Japanese-inspired items, an Ikebana flower arranging demonstration, Japanese language instructions, a Haiku lesson, chopstick lessons and other learning activities. Odaiko New England donated their time with an amazing drumming performance, highlighting the sounds of the taiko - which are infused into various aspects of Japanese daily life.

"The most rewarding part was seeing the event come together - the contributions, the outreach, the creativity and work of so many people willing to make a difference," Royce said. "Local vendors, church members and community friends were so kind and so giving. I have learned so much about Japan and we got to share some unique experiences with the community and help them to both remember, but also connect with the victims of this disaster."

Rev. Wendy Miller-Olapade, Interim Senior Pastor, can be reached at the church office at (978) 263-7387 or Pastor@boxboroughucc.org