As a new pastor, Rev. Pam McGrath of North Community Church, Marshfield Hills, felt she didn't have enough interaction with the smaller children. Since the kids go to Sunday school during worship, and they are not on committees or involved in most of the daily activities of the church, there really wasn't a chance for her to get to know them.

McGrath looked to the Massachusetts Conference Clergy Communities of  Practice for ideas.  The Rev. Ms. Debbie Cipolletti, Interim Pastor at First Congregational Church UCC, Whitman, told her about an event she had hosted at her church.  Seeking to develop a deeper relationship with the children, the pastor invited them to an early morning (8:30AM) breakfast.  Children and Sunday School teachers were invited to wear pajamas to church that Sunday and each was asked to bring two boxes of cereal - one to share and one to donate to the local Food Pantry. After partaking of the varied breakfast cereals, the kids were entertained with games and bible stories; and during the Children's Message in Worship that day the congregation was challenged to join the outreach activity.  It was a great success, and more than 100 boxes of cereal were donated to the local Food Pantry.

McGrath tweaked that idea and came up with Pastor and Pajamas Night.

Over 30 children from pre-k to fifth grade showed up one Friday night in September.  They wore their pajamas, brought sleeping bags and teddy bears, and settled in for two hours of fun in Fellowship Hall. Six adults, four middle schoolers, and three high school youth helped run the event.
McGrath, who has a background in storytelling and whose husband, Doug Lipman, is a storyteller by trade, led the group with stories, games, and music.  The two kept the children engaged for the two hours by spending 30 minutes storytelling, breaking for pizza and salad, following up dinner with games and songs, then settling down with 45 more minutes of stories.  The evening was capped off with hot chocolate and s'mores (oven-warmed - not fire roasted).
It cost approximately $275 to run the event. The church used money made from summer vacation bible camp to pay for this event, so there was no charge.  If they continue the event, they might ask for goodwill donations to pay for the food, but for now they have enough funds for at least one more event.
"Now, all the younger kids know me - and my husband - and they talk to me more," said McGrath.  "And we have really built a relationship with them."
McGrath has noticed that since the pajama event, the children participate more during the children's sermon.  They feel more comfortable answering because they are less shy now that they have met McGrath and her husband in a relaxed setting. 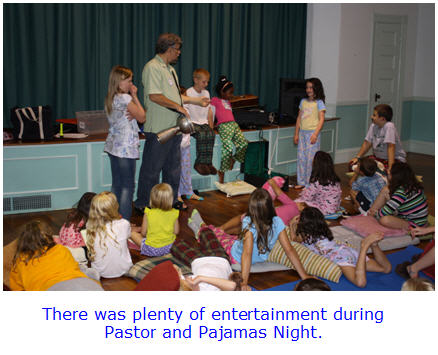 Parents also benefited from the event.  Besides being able to go out even if they couldn't afford a babysitter, some adults stayed and talked with each other for a little while.  Then later they laughed and waved to each other when they found themselves at the same restaurant in town.
One parent commented: "Thank you for such a wonderful event for the kids last night! They had a great time. Also, it was nice to get out for the evening."
"This was a wonderful experience for everyone involved," said McGrath.  "The children got to play with each other for a longer period of time and have fun; the parents were able to have a night out to themselves and not have to hire a babysitter, knowing their kids were safe and having fun; and the volunteers got a chance to know the kids outside of Sunday school and bring that creativity back to their classes. Good relationships. Good times. Everyone took away something good."
Rev. Pam McGrath can be reached at the church office at 781-837-3784 or revpam@northcommunitychurch.org.
* Clergy Communities of Practice, part of the ministry of the Conference's Pastoral Excellence Program, are designed to help clergy uncover the challenges of ministry and the possibilities of new growth.