9/7/2011
Share
First Congregational Church in Norwood Produces Music Video for VBS
In this age of MTV, movie trailer commercials on iPhones, and just-released movies downloaded on demand, what better way to bring VBS to the attention of kids and parents than by producing a music video.
That’s how John Hamilton, pastor of First Congregational Church in Norwood, promoted vacation bible school and shared the children’s exuberance to others in the community.

Hamilton, who has a background in music as well as advertising, has been looking for ways to bring spirituality into social media. So he combined his experience in shooting commercials with his “ideas that don’t make it to the sermon” (as he wrote in his blog) and turned the past several years’ VBS sessions into short video clips.
Why does he think the clips are successful for social media? “The kids are funny,” he said. “They still crack me up.  And I find when I talk to them about Jesus with a smile on my face, they listen a whole lot closer.”
“We have been involved with VBS for three years and every year my son can't wait to see himself on the video. He feels like a rock star when he sees himself.   I love seeing it because it gives me a glimpse of what their day is like. It makes me feel so good to see my children dancing, singing and smiling,” congregant Kristen Faller says. 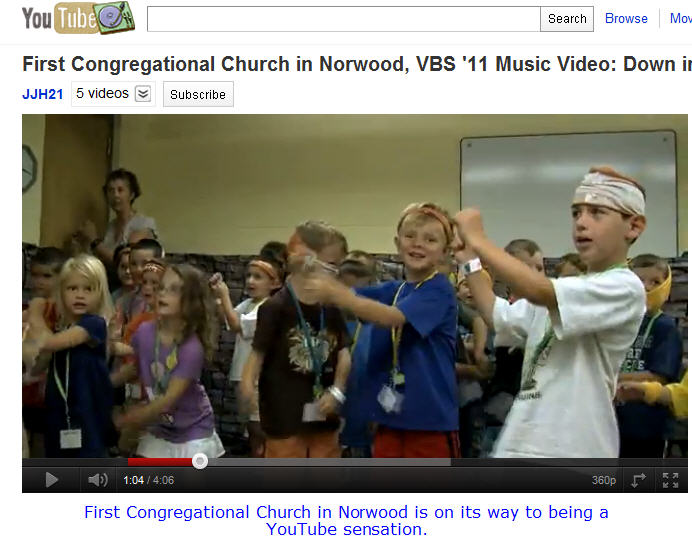 It was not all fun and games though. Hamilton took the production seriously. “The old adage in advertising was an hour of shooting/editing for 1 second of film,” he said. “It’s not that intense, but this does take some pretty large blocks of time.”
In this July 2011 video, Hamilton combined upbeat music with vignettes of smiling and dancing children and came up with 4-minute video: “Hometown Nazareth: where Jesus Was a Kid.” Also, a humorous outtake video. The result was a fun, inspiring, promotional piece that does a much better job of illustrating the week’s activities than a brochure ever could.
Hamilton did the audio/video shooting with a pro HD JVC camera and editing with the music/film editing suite he already owned.  Final Cut Pro X (a professional video and audio production suite) was used for the editing; Digital Performer was used for the music. When he was happy with the finished piece, Hamilton uploaded it to YouTube, and promoted it via his Facebook page, his blog, and the church's Facebook page. He didn’t have to worry about getting permission from those in the video as he had already obtained signed release forms from teachers and parents as part of the VBS application process.
“I do this because it’s a source of joy.  If we don’t occasionally experience joy in what we do, why do it?  There is sometimes pain and heartache in what I do as a pastor, and also in what the congregation experiences as a whole. This is all the more reason to take advantage of those things that are joyful.”
“I love the VBS music videos and I think kids look forward to them,” Kim Beaudet, mother of Noah and Olivia who both appear in this year’s video.  “They help the kids to remember the fun times and faces from their week, build camaraderie among the kids and teachers, and give parents a look at what has been going on all week. They leave everyone with a positive feeling about the program.”
Rev. John Hamilton can be reached at the church office at 781-762-3320 or firstcongo.norwood@verizon.net.