Board looks to make bold change to funding system

Board looks to make bold change to funding system

The Massachusetts Conference Board of Directors is asking churches to join them in making a bold move – replacing a funding system that dates back more than 150 years with something brand new.

The Board hopes to ask Annual Meeting voters next June to replace the current dual-stream system – in which churches are asked to pay a per-member amount for Fellowship Dues and to also make proportionate contributions to Our Churches Wider Mission Basic Support – with a single stream system called United Church Mission.

Associate Conference Minister for Stewardship Andy Gustafson says the current system is difficult to understand and explain, especially for those with no background in the denomination. And he said it is largely based on a membership model that is no longer an accurate measure of what is going on in our churches. 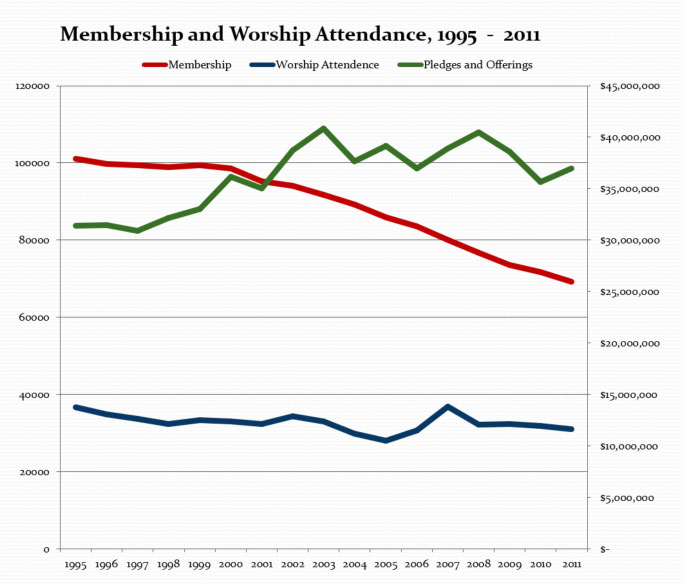 The new system would instead be based on proportionate giving – asking churches to give a percentage of their pledges and offerings [UPDATE: This has been changed to total income] to the wider church. Such a system would be fair to all congregations of varying socio-economic situations, and would be consistent with church teachings.

“Inviting giving as a percentage of income has been taught as the fair and appropriate way of giving as individuals, and should apply to local church support of the wider church giving as well,” Gustafson said.

Under the new program, churches would be asked to aspire toward a goal of giving 10% of their pledges and offerings [UPDATE: This has been changed to total income] to United Church Mission. The current average is 7 percent, and right now 30 churches given 10 percent or more.

And, as Gustafson says, “any change in funding structure carries some risk of reduced funding.”

Two major studies of the Conference funding system conducted over the past 20 years found many problems with the system while also finding it too risky to make changes.

But, delving into the issue again after questions were raised at the Annual Meeting in 2010, the Board concluded that it is a risk worth taking.

“As we got to looking at declining membership, it only made sense to start doing something about it in the very near future,” said Conference Treasurer Rick Lawrence.

“To stay with the current membership-based system would be to leave those who will come after us in a completely untenable situation,” said Associate Conference Minister Dawn Hammond. “Membership is dropping fast; church participation is not.  To continue to rely on membership as a way to fund our common ministries would be to assure the rapid dwindling of our ability to foster church vitality and manifest God’s love and justice together.”

A committee of the Board spent over a year on the issue, reviewing alternatives, talking and praying over it, consulting with national staff and drafting several possible plans. The full Board then brought an initial draft proposal to a hearing at the 2012 Annual Meeting and to four focus group sessions with leaders from 18 churches. The initial proposal was substantially revised in response to that feedback, and a new draft was brought up for discussion again at the Annual Meeting in 2013.

“It may seem like we’re doing this quickly, but this has been going on for several years,” Lawrence said, adding that the Board is anxious to educate local churches about it and get their feedback.

“We want to make sure everyone has input, that the process we’ve gone through is transparent, that the proposal is easy to understand, and that we have buy in from the churches,” he said.

Many opportunities to learn about United Church Mission will be available over the coming months, including presentations at Association meetings, online resources and stewardship breakfasts (including one on Nov. 9 at the Congregational Church of Needham).

Right now, two narrated slideshows and detailed information on United Church Mission is available at macucc.org/unitedchurchmission. There is also a survey available where readers are asked to give their feedback on the plan.

If the proposal is approved at the 2014 Annual Meeting, the Board of Directors will seek commitments from as many churches as possible to maintain or increase their overall level of giving to the Conference from 2014 to 2015.