The 29th General Synod of the United Church of Christ today (July 1) voted overwhelmingly in favor of a resolution first proposed by the Massachusetts Conference urging divestment from fossil fuel companies and other strategies - from lifestyle changes to shareholder action - to combat climate change.

“The UCC is a church of historic firsts. Today, the national Synod of the UCC added another “first” when it became the first national faith communion to vote to divest from fossil fuel companies – and to do it with the support of its major investment institution, United Church Funds," said Conference Minister and President Jim Antal. 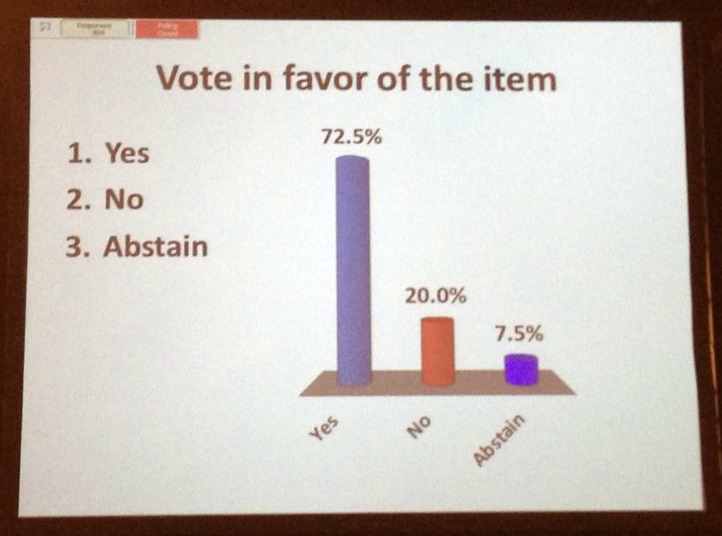 "This resolution becomes a model for all faith communities who care about God’s creation and recognize the urgent scientific mandate to keep at least 80% of the known oil, gas and coal reserves in the ground. Just as our denomination goes back to 1620, this vote expresses our commitment to the future. By this vote, we are amplifying our conviction with our money,” he said.

Antal penned the original divestment resolution and took it to the Conference Board of Directors, who in December voted to submit it to General Synod. Three other Conferences co-sponsored it, and another seven endorsed it, as did the Massachusetts Conference Annual Meeting and the UCC Collegium of Officers.

"If we pass this resolution ... our vote will bring the world one step closer to revoking the social license which the Exxons of the world require to continue wrecking the earth," Antal told Synod delegates in his two-minute floor speech. "Once again, as John Winthrop told the Pilgrims, the eyes of the world are upon us. Let us show the world our faithful leadership and hope as we commit ourselves to protect the wondrous creation God has entrusted to our care and keeping."

Don Hart also called on delegates to support the resolution.

"This resolution calls on each and all of us to make difficult changes to the way we live each day of our lives in order to be a part of the rescue of Creation," Hart said. "For United Church Funds, the road ahead will not be easy or cheap. But then again, the United Church of Christ deserves nothing less from us. Creation deserves nothing less from us."

The resolution as passed calls on all settings of the denomination to "commit to using a spectrum of strategies to reduce the use of fossil fuels, our carbon footprint, and our complicity with the fossil fuel industry." Strategies listed ranged from making lifestyle changes in homes, businesses and churches, demanding legislative action, engaging in public witness and engaging in "activities, boycotts and shareholder actions with companies, up to and including divestment."

It calls for making "shareholder engagement on climate change an immediate, top priority for the next five years" and calls on both the United Church Funds and the Pension Boards to "create and promote an investment vehicle free of fossil fuel companies for qualified investors within 18 months."

Finally, the resolution calls for the creation of an online database for all entities of the church to report actions they take that support the resolution (e.g. individuals or congregations who divest).  and commits both United Church Funds and the Pension Board to make quarterly updates on their progress. The resolution also commits each of the next five Synods to hold a hearing on climate change.

The Pension Boards did not participate in the negotiations that led to the substitution resolution that was ultimately adopted. After the vote, Michael A. Downs, Pension Boards CEO issued a statement that his organization "will support and implement the resolution, to the extent possible, within our legal responsibilities as fiduciaries of the Annuity Plan for the UCC, acting on behalf of the active and retired members who have entrusted their retirement assets to us."