The following story is by Eric S. Anderson, Minister of Communications and Technology for the Connecticut Conference UCC and is reprinted with permission from CTUCC.org. 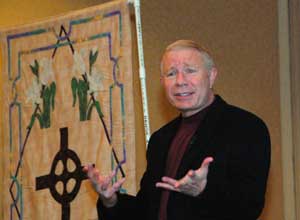 The Rev. Michael Piazza does not believe in a static Church. He believes in growth -- spiritual growth, outreach growth, and participation growth -- and in his decades of ministry at Catheral of Hope in Dallas, with the Center for Progressive Renewal, and now at Virginia Highland Church (UCC and Baptist) in Atlanta, Georgia, he has demonstrated repeatedly that "If you start with a Why that is God given, the How will come."

Piazza was the keynote speaker to a diverse group of Christian leaders attending the New England Ecumenical Stewardship Council's 2013 conference, "Liberating Generosity: because generosity IS liberating!" He and the workshop leaders consistently stressed the message that the Church can not continue to function as it has, or its days are numbered. The Church, he said, is not floating serenely down a river, it is in the midst of foaming rapids of constant change. "Unless the church can develop a genuinely adaptive form of leadership, and move past being quaint," he declared, "we will be relegated as an institution that is not only a museum of the past, but that is toxic to the future."

Fittingly, the stewardship conference closed with an offering, contributed to Church World Service.

Piazza urged the pastors and lay leaders to adopt and commit to a compelling vision for ministry, one flexible enough to adapt to shifting reality but one that carries a sense of urgency. In a world filled with need, he said, there are manifold situations that cry out for aid. "What do you care enough about to sacrifice?" he asked. "Is it children? Is it the homeless? Is it peace?"

At Cathedral of Hope in Dallas, which he led for over twenty years and which grew dramatically in size and ministry during that time, he urged members to "take off their bib, and put on your apron:" that is the dividing line between people who come to be fed, and those who come to feed others. "As you do this, your life is the one that is most blessed."

The Church's failure to take up the topic of money has given it a disproportionate amount of power in the life of Church and of Christians. According to some studies, said Philip and Janet Jamieson, 97% of Christians do not discuss their financial affairs with the pastor, or with anyone else. "When the church is silent on the topic of money," said Philip Jamieson, "it affirms that this is a topic on which Christ has nothing to say."

Determined to break that silence, the Rev. Molly Baskette, senior minister at First Church Somerville (MA) UCC, gives her members significant challenge -- and opportunity -- for spiritual growth. Building on the congregation's work with individual testimony during worship, and after two years of discussions, they began to invite leaders to bear witness to their own giving: and to name the amount. Baskette did it first, and it was, indeed, a somewhat daunting, but richly rewarding, experience.

"Any time we have to tell our own story in a vulnerable way," she said, "it's a huge opportunity for spiritual growth... When our outside matches our inside, we are whole people." The spirit comes with a tangle measurement: Over the last five years, the church has experienced 15-30% increases in giving each year.

The Church lives in a white water world, where ignoring the rapid changes invites disaster. With a compelling vision, with a realization that faith demands service, with the courage to tell our own stories in a vulnerable way, the Church can grow in the Spirit, in the numbers, and in the dollars available for mission.

The Liberating Generosity conference was held in Boxborough, Massachusetts, March 15-16, 2013.