The recent vote by the Massachusetts Conference Board of Directors calling on the entire United Church of Christ to divest from fossil fuel companies is receiving national attention. 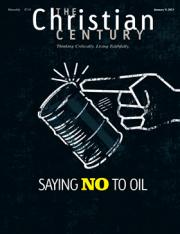 In the cover article of the Jan. 9 issue of The Christian Century, environmental activist Bill McKibben lifted up the efforts of the Conference in his call for schools, churches and municipalities to divest.  (THE CHRISTIAN CENTURY: Playing offense: It’s time to divest from the oil industry)

In an appeal to all Conference Ministers to join in sponsoring the resolution, Antal said: "The reality of climate disruption has touched each of our Conferences. As the resolution states, this is only one strategic response. Humanity is beginning to undergo an utterly unprecedented kind of change - and I believe there has never been a more important time for the church to show leadership."

Read the full text of the Synod Resolution here

Related article: Board of Directors votes to bring resolution to Synod calling for divestment from fossil fuel companies (Dec. 11, 2012)