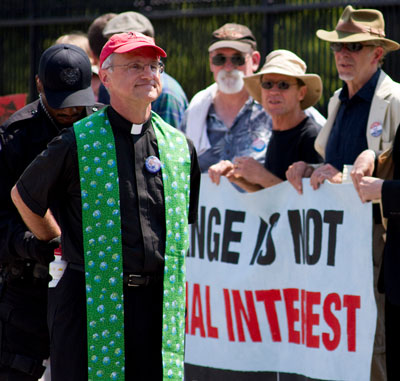 Massachusetts Conference Minister and President The Rev. Jim Antal unexpectedly spent three days and two nights in jail in Washington DC, after being arrested during a sit-in aimed at pressuring President Obama to deny the permit for a massive new oil pipeline.

"We expected to be arrested and given the opportunity to bail ourselves out that day," Antal said of himself and the other 64 protestors arrested on Saturday, Aug. 20. "But what ended up happening was that we were arrested at noon on Saturday and released on Monday at 4:45 PM."

According to an article on the tarsandsaction.org website, U.S. Park Police told organizers of the protest that the longer-than-usual jail time was expressly intended as a deterrent to future participants of the sit-in, which is planned to continue for two weeks. Protestors were not deterred, however, as approximately 50 people were arrested each of the next two days. They were all released the same day as their arrest.

Antal, who was arrested twice in the 70s and 80s during nuclear protests, said the conditions were a lot rougher than he had expected. For most of the duration of his arrest, he was kept in a 7-foot x 5-foot cell with another protestor as cellmate. They had stainless steel toilet and sink and stainless steel bunk beds, with no mattress or bedding of any kind.  Lights were kept on 24 hours a days, and the temperature hovered in the upper 80s.

Asked if it his public witness was worth the hardship, Antal said "Yes, unambiguously."

"This is not just an environmental issue or a climate issue but a game changer," he said. Antal quoted climatologist Jim Hansen, who has said that if the carbon deposits in the Tar Sands of Canada are mined and converted into oil, the process is so dirty that it will increase the carbon parts per million in the atmosphere from 394 to 600 over the next 20 years. President Barak Obama is under pressure to approve a Keystone XL pipeline from the Tar Sands to Texas oil refineries,  a key part of mining the Tar Sands.

"Twenty years from now, every person alive will look back at this moment. if Obama says yes, his name will be cursed among the people of the world. If Obama says no, he will be one of the heroes of human history," Antal said. "That's what it comes down to. Was three days in the slammer worth it? Oh yeah."

Antal was among the first wave of protestors arrested at about 11:45 AM on Saturday. They were put in plastic handcuffs and taken by Park Police to an outdoor holding area, where they sat on the ground in their cuffs for the rest of the day, sharing a small amount of shade. At one point, the handcuffs were removed from Antal - who was wearing a clerical collar and stole - so that he could pour water into the mouths of the other protestors.

Late that night, they were transferred to the custody of the metropolitan police. As they were being walked to their cellblock, they were given the choice of sandwiches - one slice of bologna or processed cheese on white bread - and a cup of water or fruit punch. From then on, they were only fed every 12 hours, and Antal said the potability of the water in the cells was questionable.

The group spent Saturday night, all day Sunday and Sunday night in the cells. They slept on stainless steel bunks, with no mattresses or bedding of any kind. "There was nothing in the cell that you could touch that was not stainless steel," Antal said.

On Monday morning, they were handcuffed again and transported to a holding pen for the day, where the group of approximately 45 male protestors were combined with another 10 or so general population prisoners. For that trip, they had their feet shackled as well.

"We were treated like hardened criminals, even though we were in for a so-called traffic violation," Antal said.

Finally, just before 5 PM on Monday evening, the group was "fully released" with no fine and no requirement that they return. However, their belongings - telephones, wallets, belts, shoelaces - were still in the custody of the Park Police, and would not be available until the next morning. Even then, they were given the wrong address to retrieve their items.

"It was Kafkaesque," said Antal. "We were peas in a shell game being pushed around, never being told why or for what reason. What little information we were able to get turned out to be inaccurate and misleading."

Minister & President's Message: Humanity Has a Dream.... That a Life-sustaining Climate Can Be Won