Changing Lives was the theme of the 212th Annual Meeting of the Massachusetts Conference of the United Church of Christ, and it was a theme that resonated throughout the day-long event held Saturday, June 18 at the Sturbridge Host Hotel & Conference Center.

“The state of our Conference is about becoming a new creation,” said Minister and President Jim Antal. “Becoming a new creation is both the greatest opportunity and the greatest challenge that our Lord Jesus Christ offers us as disciples.”
And the day was indeed one of challenges and opportunities:
Tornadoes
Attendees saw a slideshow of the devastation of the June 1 tornadoes – devastation that was literally just a few miles down the road from the meeting and that has left hundreds of families without homes.
Bob Marrone, Pastor of the First Church of Monson, UCC, and Ian Lynch, Pastor of the First Congregational Church of Brimfield, were presented with prayers shawls and both said a few words about their experiences. Both of their churches have responded to the tornadoes by becoming beacons of hope in their communities, turning into outreach centers that are providing those in need with constant hot meals, supplies and support while they begin the task of recovery. Members of the Conference Board of Directors and staff visited the two churches on Friday.
"Just like on Pentecost, the violent wind that moved through God’s people has moved us from placidness to hit the streets with a message,” Lynch said of his church’s outreach effort. “God’s people are preaching in the center of Brimfield, and heeding the words of Saint Francis, they are using words only when necessary.”
Conference churches were invited to take up special collections for tornado relief, and the initial wave of donations was taken during the Annual Meeting offering. Dozens of churches also brought cards and posters offering the people of western Massachusetts their support.

Find out how your church can help now: www.macucc.org/tornadoes
(The slideshow shown at the meeting is also now available on this page.)
NEW: $48,000 collected for tornado relief - see related article
NEW: Article on where the money collected for tornado relief will go.
Conference Budget
Delegates approved a $2.5 million Conference budget that required difficult cutbacks to avoid a large deficit for 2012. Those cuts include eliminating the position of half-time Associate Conference Minister for Evangelism & Renewal Paul Nickerson, who will instead do consulting work for the Conference, and eliminating the position of Hispanic Ministry Coordinator Cesar DePaz. The budget also reduces the support for the Massachusetts Council of Churches from $54,300 to $30,000. 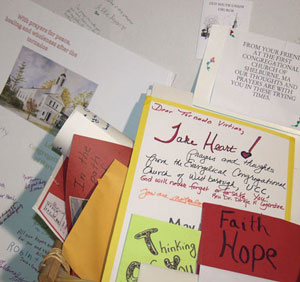 In addition, delegates approved reducing the amount of Our Church’s Wider Mission Basic Support that is passed on to the national setting of the church from 55% to 53%. The percentage had previously been reduced from 60% to 55% in 2009.

Treasurer Walter Kreil explained that the Conference was facing a $211,000 deficit in the 2012 budget if it did not take such drastic actions.

“There was no good or easy options for eliminating a deficit of this magnitude, and your Board prayed and struggled at length over how to respond,” Kreil said. “The proposed balanced budget comes at a considerable cost.”

In response to eliminating funding in the area of Hispanic Ministries, the Board of Directors announced a new fundraising effort to support those ministries outside of the Conference budget. Lisa DePaz, who has worked closely with her husband in the program, expressed confidence in that effort, announcing “the best is yet to come” for the ministries currently active in Jamaica Plain, Lowell and Worcester as well as Everett, Soutbridge and Lawrence.
More: Treasurer's Report, the 2012 Conference budget in detail and supporting Financial Reports. 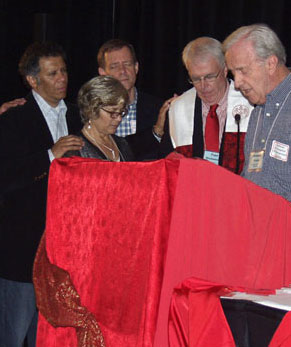 In response to that loss, this Annual Meeting marked the kickoff of a $3.5 million Sustaining Pastoral Excellence Endowment Capital Campaign, and Associate Conference Minister Andy Gustafson announced that $610,850 had already been donated or pledged to the campaign.
More: www.macucc.org/excellence
State Womens' Fellowship

Delegates also approved a bylaw change that resulted in the dissolution of the Massachusetts State Women’s Fellowship. Proposers explained that the role of women in churches has evolved so much and that there was no longer a need for a separate fellowship dedicated largely in part to training them for leadership roles.

“Women are now involved in all aspects of our churches,” said Martha Crawford of the First Parish of Westwood.

No freedom from change

In his remarks, Board of Directors Chair Dick Harter challenged delegates to think about how much their churches have already changed over the past 10 years.

“But, God does promise to care for those that respond to God’s call.  We, you and I, are heirs of this promise here in Massachusetts. We have been called, and gathered into churches from the Bay to the Berkshires. These gathered communities are precious to God,and precious to us. But they are not unchanging.”