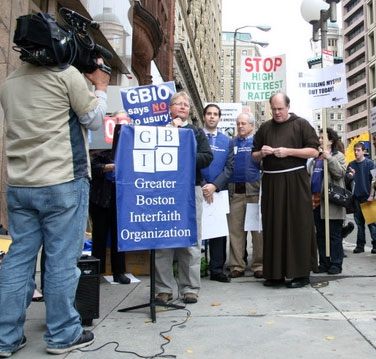 From the Greater Boston Interfaith Organization:

On November 17, 2010, 113 religious leaders from across Greater Boston gathered in front of Bank of America’s Government Center branch to protest the bank’s usurious lending practices by moving their money. At the gathering, 136 individuals (represented by leaders of their religious institutions) as well as heads of two major religious institutions - Hope Central Church in Boston and First Church in Cambridge, UCC – closed their accounts.

The Rev. Dan Smith, Senior Pastor of First Church Cambridge, Congregational, UCC, said, “Today was only the beginning. We are starting a movement – a movement to move our money out of Bank of America and other usurious banks. We’ve had enough with these interest rates, and we’re not going away until these banks stop!”

Read more about the protest and the issue, and see pictures at the Greater Boston Interfaith Organization website.

PHOTO: The Rev. Laura Jarrett (holding sign), Pastor of the Hope Central Church, was one of the leaders of a Greater Boston Interfaith Organization protest at Bank of America.