7/19/2017 - by: Debby D. Kirk - Leadership Development Making Disciples Together, As One
Share 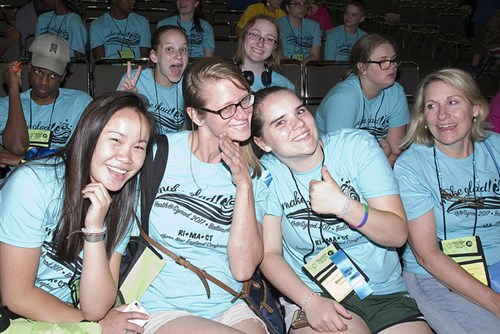 Youth from all over southern New England boarded a bus for Baltimore in the early hours of June 30. They had gathered at First Church in Windsor the night before to get acquainted and do some prep work for Youth @ Synod. This group was part of a collaborative effort of the RI, CT, and MA Conferences.

“We worked on this together for the past several months. We had sponsored a similar trip in 2015 when Synod was in Cleveland so this coordination of publicity and transportation is familiar to us,” said Kristin Putney, CE/YM Resource Consultant for the Rhode Island Conference.

There were 37 in the group from Southern New England, representing 25% of the registrants for Youth @Synod. Though participants do not serve as voting delegates, these young leaders connect with the wider church and learn about social justice issues.  Participants in Youth @ Synod were actively engaged in three resolutions. They attended committee meetings, drafted their own statements, and presented testimony.  Rhode Island youth even created graphics for the resolution regarding rights of children living under Israeli Military occupation. The Synod schedule was modified to allow these teams three minutes to present to the full body when these resolutions were brought to the floor.

“This part of the program had a big impact on our youth.  They were fascinated by the dialogue and rules of parliamentary procedure.  Many of them came away with the desire to serve as delegates in the future,” said Barbara Langill, leader of the Massachusetts Conference group.

Youth followed the debate closely and conferred at each vote. Raden Sorli Hawk of Lynnfield, MA and others plan to approach their associations to see about representing their congregations at the next Tri-Conference meeting or General Synod.

Owen Roberts of Immanuel Congregational Church in Hartford, CT reflected, “While I had some deep moral and ethical criticisms of some of the resolutions that were passed, my overall experience was not dampened by this. Actually, seeing the process of back and forth debate provided me with greater inner-moral clarity and allowed me to strengthen my personal convictions.”

Several participated in worship as both liturgists and dancers. Among these were youth who are ‘Thinking About Working For God’ who donned lavalier microphones and stoles to read before a large congregation.  “It was a privilege to be a reader for worship,” said Reid Young of Memorial Congregational Church in Sudbury, MA. 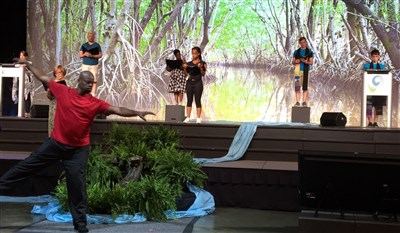 “This trip nurtured leadership skills in our teens and helped them to find their voice.  Youth @ Synod allowed them to both observe and practice advocacy,” said Debby Kirk, Director of Youth and Young Adult Ministries of the Connecticut Conference. “Julia Hoffman from Windsor was empowered to speak for rights of youth and offered a powerful statement at an afternoon speak out session.”

Several named specific intentions: Highlights ranged from attending workshops on topics such as conflict resolution and mass incarceration, to talking with UCC college reps in the exhibit hall, to enjoying the pool and watching fireworks over the Baltimore Inner Harbor, and hearing uplifting messages from the Rev. Traci Blackmon and the Rev. William Barber.

Above all, youth expressed appreciation for the new friends they had made, both within their conferences and across state lines. As the bus pulled in to the parking lot in Windsor on July 5, a weary but inspired group posed for one more picture, said goodbyes, and promised to keep each other in their prayers.