The Boards of Directors of the Connecticut, Massachusetts and Rhode Island conferences on Saturday voted unanimously to commit to forming a new Conference to minister and come together to make an impact as people of faith.

The three Boards came together for a meeting in Woodstock, Connecticut, and after worship and conversation together, went into separate meetings. Each Board then voted unanimously to adopt a resolution (text below) stating their intent to move forward in creating a new Conference.

They will ask the Annual Meetings of the three Conferences, being held together June 16 and 17, to endorse their intent to draft a proposal for a new Conference. The Boards would then bring that specific proposal to another joint Annual Meeting in 2018 for ratification.

Several Board and staff members spoke passionately about this new Conference as being much more than an adjustment in structure. They said they see it as a new entity able to both support the church of today and walk with new manifestations of “church” in the future.

“This truly is our time,” Massachusetts Conference Board Chair Vard Johnson said. “We’re called to do this. The wind is at our back and we are in God’s hands.”

In the resolution, the Board says their time of discernment has led them to believe the proposal for a new Conference would call for a single Board of Directors, and “may also recommend a transition to a unified budget and a new staffing structure.”

Some Board members said they have heard reservations about committing to the formation of a new Conference before all the many details have been worked out. But others said the time for a commitment had come.

“When they decided to create the United Church of Christ, they were clear they were creating a new denomination,” said The Rev. Paul Goodman, Interim Pastor of the Plantsville Congregational UCC in Connecticut.  “How they would make that work was not hammered out. They prayed about it and they knew, moving with the Holy Spirit, that once the decision was made to come together, their commonalities were greater than their differences.”

“I think we are back in that same spot, standing on the shoulders of our forebears who created the denomination,” he said.

The Rev. Jocelyn Gardner Spencer, pastor of the First Congregational Church of Woodstock, Connecticut, pointed out that Conference boundaries have not changed since the UCC was created in 1957, and that they are limiting.

“So we would be decreasing those artificial boundaries that divide us in unnecessary ways, and on the flip side increasing our shared prophetic voices. We are a lot stronger and a lot louder when we speak together,” she said.

The meeting was originally scheduled for Jan. 7, but was postponed due to a snowstorm. Jan. 21 had been chosen as a snow date months ago, before the Women's March on Washington and its sister marches were planned. Connecticut Conference Minister The Rev. Kent Siladi acknowledged that many in the room wished they could be at a march instead of a meeting. He said sometimes our two worlds - the need to be well organized and aligned, and the need to be flexible and innovative - collide. He urged the gathering to think about becoming "bi-cultural" and =likened to that the challenges facing the church of the future, challenges a new Conference may better be able to navigate.

The Resolution below was adopted by the three Boards.

Grateful for the 2015-2016 time of discernment, we believe that God is calling our Conference to live into increased interdependence with the other two UCC Conferences of southern New England, that we make an impact by ministering and witnessing together, and that we live in a time when God is calling us to do a new thing.

As of today, we commit our Conference Board, staff and designated representatives to work with our counterparts from the other two UCC Conferences of southern New England to engage in a visioning process that includes (among other things) reasonable sharing of records and information, due diligence in sharing financial information as well as cultural and operational practices, encouragement of our members, churches and Associations to participate in each other’s’ programs and initiatives, and responding to each other’s’ inquiries – all focusing on the creation of a proposal that would be brought to a joint annual meeting of the three southern New England Conferences of the UCC in June 2018.

Our time of discernment has led us to imagine that this proposal will be to create a new Conference:
i) with a single Board of Directors made up of diverse members coming from the three Conferences.
ii) This single Board would also act, as necessary, as the Board of Directors for each of the Connecticut, Massachusetts and Rhode Island Conferences.
iii) The proposal would allow for the three historic and legal Conference entities of Connecticut, Rhode Island and Massachusetts to remain in place;
iv) The proposal may also recommend a transition to a unified budget and a new staffing structure.
v) The proposal recognizes that Conference boundaries – including changes in Conference boundaries – are determined by vote of synod and we anticipate that if this proposal is approved by the joint annual meeting of the RI, CT and MA Conferences in June 2018, we will appeal to synod in 2019 for recognition.
vi) The proposal may also provide a common table for other faith communities, both historic and those coming into being, to share in common vision.

We also recognize that the planning process we now begin may lead us to respond to God’s call and increase our interdependence through other means. 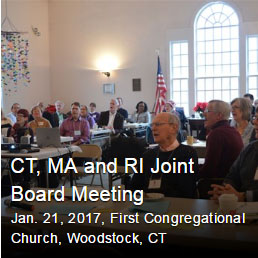 
View a photo gallery from the meeting