1/13/2015 - Conference staff
Share
Jan. 16 UPDATE: The new banner was hung at the Conference center's sign at the corner of Salem End and Badger Road (see photo below right, bottom); the remaining "Black Lives Matter" banner is hanging at the Badger Road entrance sign.


Two "Black Lives Matter" banners hung at the Massachusetts Conference's Framingham office have caused some controversy in town - prompting the Conference staff to invite the public into a conversation.

Just before Christmas, the leadership staff hung two "Black Lives Matter" banners at the Badger Road office, one on each of the center's signs. The banners came via the New York Conference, which was inspired by the efforts of a local church to order them in bulk. (UCC ministers in New York are proclaiming justice and paying it forward. ucc.org, Dec. 10, 2014)  Earlier in December, members of the Massachusetts Conference staff had similarly posed for photos with signs that read "Black Lives Matter" at a denominational meeting going on during the days following the death of Eric Garner in New York, a photo that was shared via social media and posted on the Conference website.

But on Monday, Dec. 29, when staff returned to the Framingham office after the holiday closing, they discovered that someone had used white spray paint on one of the banners to cover over the word "Black," and then used blue spray paint to change the message to "All Lives Matter." The change reflected a debate seen on social media after the #blacklivesmatter hashtag started trending on Twitter. At around the same time, a nearby resident emailed town officials complaining that the banners were in poor taste and violated local sign bylaws. (Framingham officials have since ruled that the banners are protected as free speech.)

When Associate Conference Ministers Ellie Richardson and Jonathan New discovered the vandalized sign that Monday, their first reaction was not to call the police (although they were informed later). Instead, they removed the altered banner and replaced it with a sign that read "Let's Talk." 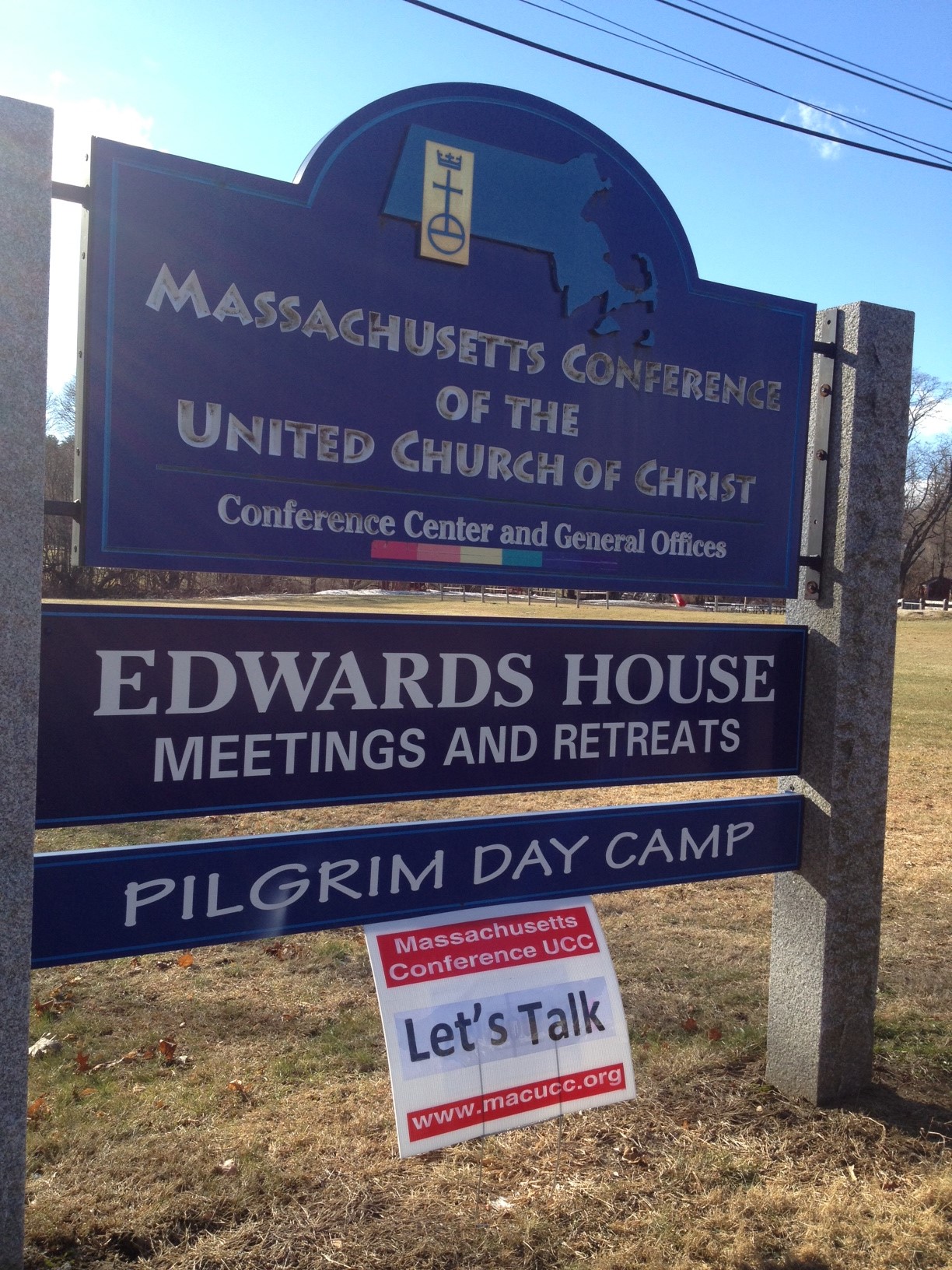 Now, via the Conference website and notices being sent to local media, the Conference staff is inviting the public to come talk over the issue. Anyone interested in coming to a discussion is asked to indicate their interest via this form.

The Conference's Leadership staff also released this statement explaining why they had chosen to hang the two banners, as well as a third at the Conference's Waltham office (another was given to South Congregational UCC in Springfield):

For the leadership staff of the Massachusetts Conference, the decision to post “Black Lives Matter” banners at the Framingham and Waltham sites was neither controversial nor difficult.  As white Christians, we want to be part of the nationwide public witness against racism spurred by the deaths of Michael Brown, Eric Garner, Tamir Rice and other unarmed black men.  Racism remains widespread throughout our society, it is destructive to everyone, and it has no place in the world we believe God is calling us to help build.

All lives are infinitely valuable!   However, black lives - both male and female - are at consistently greater risk than white lives, including the risk of being killed due to the reflexive fear and unconscious bias of armed police officers. We post ‘Black Lives Matter’ as a way to assert that this is unacceptable – that the personal and systemic racism by which our nation is losing so many precious black children and adults must be ended, and we want to help end it.

As white people, we also know that we share with white police officers their reflexive fear and unconscious bias, even as we seek to rid ourselves of these forms of racism.  Those who serve as police deserve much better help and training in this area, as eloquently pointed out by the Rev. Liz Magill (MACUCC Blog Post: Slaughter of the Innocents, Dec. 8, 2014).  Our latest banner, ordered following the deaths of Officers Rafael Ramos and Wenjian Liu, expands on the theme of God’s realm by declaring that we seek to be  “ building a world where black lives matter, police lives matter, all lives matter, to everyone.”

May God’s will be done on earth as it is in heaven! 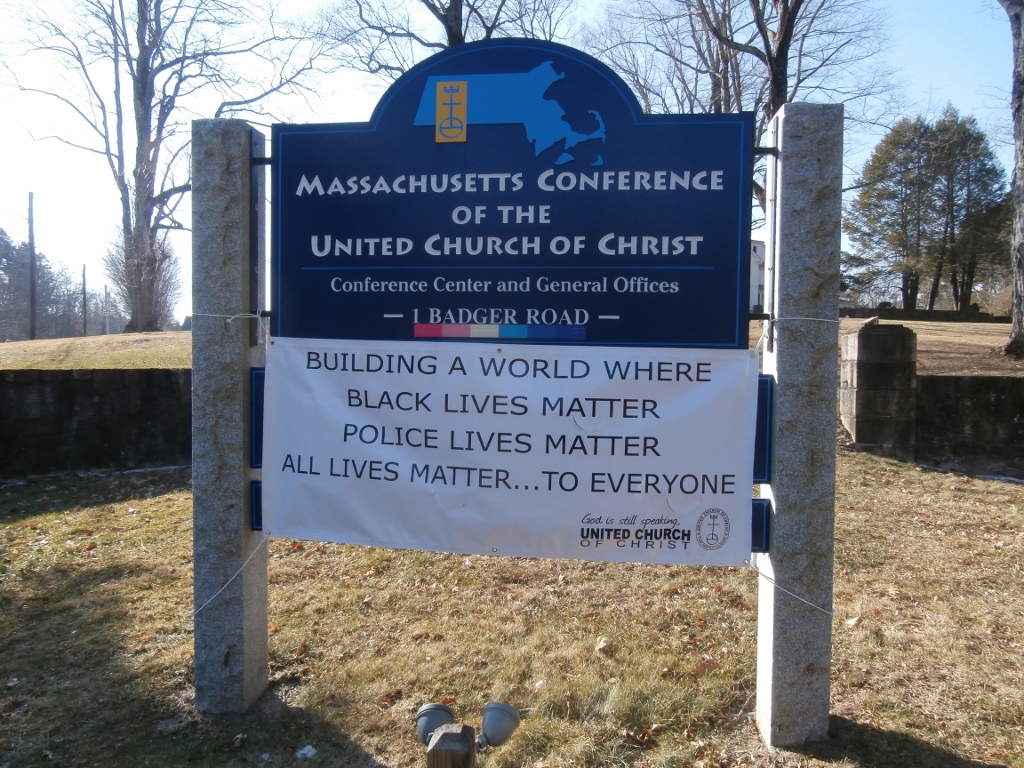 For more information on the topic, or to get involved, visit: macucc.org/racejustice

To attend a discussion with Conference staff, indicate interest using this form.

NOTE  The Framingham Interfaith Clergy Association had already planned a forum related to this issue. Residents are invited to attend Framingham Coming Together, a community forum being held Wednesday, January 28th, from 7 - 9 PM in Nevins Hall at the Framingham Town Hall. The event is "an opportunity to share stories in the community around the violence and loss of life in the tragedies of Ferguson, New York City and around the country."