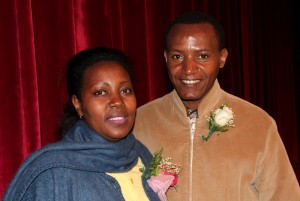 During the winter of 2015-16, Central Congregational Church committed to supporting a Providence-based refugee family. After reading of the long-standing tragedies we have come to know as the Syrian war, CCC held the belief such efforts directed toward a Syrian family would make sense. CCC expected to support just such a family when a last minute change in resettlement plans at Dorcas Institute resulted in CCC’s accepting the opportunity to support a family of 5 originating in the Democratic Republic of Congo via Uganda, where the family spent the past five years. The family of two parents and three children ages 10, 9 and 8 arrived at Greene Airport on a chilly February night where a gathering of Central members and Dorcas staff met them and ushered them to their new apartment. Heat and food were in plentiful supply. In the intervening months, so much has occurred for this family here in the United States that capturing in these few paragraphs the magnitude of what is unfolding is a challenge. But here it is...in a nutshell: Since the outset, CCC members have come forward with expressions of interest in providing a range of counselling, teaching, partnering and mentoring services, where and as-needed. Each Sunday, members have donated first winter clothes, shoes, slippers, boots, sneakers, shirts, fleece, toiletries, wall art,  and most recently various forms of important summer attire-- cotton t-shirts, towels, flip-flops, shorts and jackets. Donations of clothes come into church each week for Charlotte and Alphonse to consider. What is not utilized by the family is donated to Dorcas. Members have stepped forward each Sunday to shuttle the Mupenzis to and from Central Church. Often, after the service, a Central family will host an event, a lunch, picnic, trip to Bristol, RI, a stroll along the India Point Park, just to help the Mupenzis glean a sense of the particular qualities of near-by Rhode Island and of the wider American culture. As summer approaches, the children have been granted entry to Moses Brown Summer Camp where they intend to continue to master language, art, music, sports and all the stuff of summer camp that makes for lifelong memories. We are grateful to all whose contributions have made this extraordinary opportunity possible. Lastly, and most importantly, in the unfolding of this commitment, we at CCC are most grateful for the contribution to our congregation the Mupenzi family brings each Sunday morning. We are so happy to witness the presence of Alphonse and Charlotte’s three vibrant children, their generosity of spirit and willingness to bring to our church family the essence of the teachings of Christ in all their eagerness to participate, understand, and grow--in wisdom and in faith. In this circumstance, blessings seem to be everywhere and about, which we are more than glad to report. Respectfully submitted, Rebecca Spencer, Senior Minister Claudia Demick, Associate Minister Central Congregational Church