At the Rhode Island Conference Annual Meeting on April 30, the Rev. John Dorhauer recounted what a surprise it has been to find that people get nervous about meeting him since he was named General Minister and President of the United Church of Christ.

But then he said he realized that their nerves are not about him personally. Instead, the reactions show what the UCC means to people.

“The Holy Spirit envisions a future in which we matter,” he said. “We can read all of the data and statistics we want about church membership, about contributions shrinking, and like we’ve been doing for the last two or three decades we can wring our hands with anxiety and assume that means our demise is on the horizon and that our diminished capacity and relevance is the narrative of our future.”

“But I don’t believe that for a second,” he said. “We have been one of the greatest agents of social transformation this world has ever known. We’re not going to stop being that, nor is the Holy Spirit going to stop investing in a people that committed to social transformation and the creation of a beloved community and the installation and ushering in of God’s vision of shalom.”

Dorhauer went on to tackle the question of why the church even has denominations, and quoted Michael Kinnamon, who said denominations exist “in order to perpetuate an aspect of the gospel that – but for them – would be in danger of diminishment or extinction.” 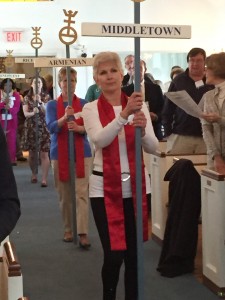 The UCC, he said, is needed for two such things

The first is our commitment to unity.

“It was a bold thing we did in 1957, forming a unity of ecumenical partners,” he said. “Now, it’s dawning on us, that the call for an ecumenical unity is too small a task, that this is at least an interfaith, interreligious task.”

“We walked into that space well ahead of any of our ecumenical partners and for 10 years or more we’ve been preaching that aspect of the gospel unceasingly and unapologetically,” he said. “And it’s no coincidence that within 10 years of opening that campaign and walking into that space and crossing that boundary, every state in the country is now a marriage equality state.”

The Conference’s Annual Meeting was held at the Seekonk Congregational Church in Seekonk, MA. More than 150 people attended, and they were able to visit marketplace tables and shop a selection from the Yale Divinity School Bookstore.

Business included the installation of Conference committee members and a minor bylaw change.

In addition to giving the keynote address and preaching, the Rev. Dorhauer also participated in a conversation regarding the possible merger of the Connecticut, Massachusetts and Rhode Island conferences.  Read an article about that and watch his comments here.