WEST HARTFORD (06/14/2016) -- Attendees to the 149th Annual Meeting of the Connecticut Conference June 10 – 11 were called upon to revitalize their churches by working for justice.

"There ain't no closet prophets," said Bishop Yvette Flunder, the keynote speaker. "Come out! Get in trouble, make trouble, be trouble until righteousness rains down like water; justice, like water."

Flunder said the entire world is listening for the sound of Pentecost, for a justice message to come from the United States that is greater than the "continual vitriol" that has been such a part of the current presidential election.

"This election is a game changer," she said. "We've never seen anything quite like this. Now, we need the voice of the United Church of Christ to step into this and have something to say."

Flunder told the meeting that churches will find revitalization when they come out of their buildings and step out on to the "front line of change."

"A lot of division in the church comes from the discontent of our not using our energy for the reason God has given it to us," she said. "Church fights happen because people are not doing Kingdom work. What we're doing is expending our energy trying to sustain an institution. It takes a lot of energy to sustain an institution, but if you take that energy and turn it outward and start doing the work in the street, you don't have to worry so much about bricks and mortar. God will take care of the bricks and mortar as we take care of the work of ministry."

Earlier in the day, at the clergy luncheon honoring pioneer female clergy who broke into the ranks of male-dominated ministry, Flunder said the church today needs "aggravated prophets, agitated prophets."

In his address, Conference Minister The Rev. Kent J. Siladi joined in the call to get loud for justice.

"The Spirit is inviting us to be bold in these times in which we live," he said during his address. "There is a troubling cultural narrative that is swirling around us."

"We cannot or should not sit idly by and be silent about what we hear and see every day that troubles our souls and leaves us in a state of anger, lament and grief," he said.

Siladi suggested that instead, the UCC in Connecticut can create a new legacy built on moving from a culture of fear to one of love; moving from independent to interdependent bodies and together moving from "gathering in" to "sending people out to make our communities, our state, our nation and our world a more just, loving and compassionate place."

Interdependence was another theme of the meeting: on Saturday afternoon, delegates divided into small groups to discuss the idea of the Connecticut, Massachusetts and Rhode Island conferences federating or merging or in some way working more closely together. They submitted questions which were then addressed by Siladi, Massachusetts Conference Minister The Rev. Dr. Jim Antal, and Rhode Island Interim Conference Minister The Rev. Barbara Libby.

Some questioned whether a merger is already a "done deal;" others said they could not judge the idea without knowing more particulars about finances and staffing.

Antal gave assurances that a decision to merge has not been made, and said it would be premature to even discuss what staffing looked like before delegates have gone through a discernment process to decide whether this is an idea they want to pursue.

Siladi agreed, but also challenged delegates to think about what staff positions could be created with a combined budget that cannot be created now.

"What would a staff look like if we were to do something new?" he said.

The three conferences will hold a joint Annual Meeting next June, where they likely will be asked to vote on whether to continue toward some type of joining together.

Toward the end of the gathering, The Rev. Walter Pitman of the United Church of Christ in Southbury challenged the three to "give us a statement of purpose" to bring to their churches.

And once again, talk turned toward justice.

"We are the church the world needs now," Siladi said. "Together we can make southern New England a more just, compassionate place." 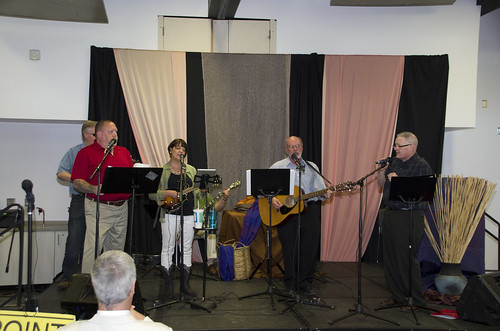 Tiffany Vail is the Associate Conference Minister for Communications.