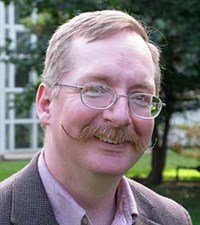 GLASTONBURY (02/24/2016) -- Colleagues, friends, and family of the Rev. Eric Anderson gathered at First Church of Christ UCC in Glastonbury on Sunday to celebrate Anderson's 17 years of service to the Connecticut Conference UCC. The Farewell Service included singing, scriptures, and, appropriately, a great deal of storytelling and humor.

Anderson departs his role as Associate Conference Minister of Proclamation, Identity, and Communication on March 12. He will be moving to Hawaii shortly after where he has been called as pastor of the Church of the Holy Cross, in Hilo.

"Eric has served on the Conference staff with, I think, a world record number of job titles," joked Conference Minister the Rev. Kent Siladi as he spoke to the many roles in which Anderson has served the conference. From Conntact Editor and Webmaster to Minister of Technology and Communications, Anderson has been involved in all aspects of digital and print communications, as well as nearly two decades of technology and social media development.

"He has schooled us in a whole range of high-tech tools that can help us to spread the news, and stay connected," said Rev. Alison Buttrick Patton, pastor of Saugatuck Congregational Church.

Rev. Dr. Shelly Stackhouse echoed Patton's praise of Anderson's unique ability to tell stories through a variety of tools. Through years of viewing Anderson's photos and reading his stories, Stackhouse began to see "the Spirit of God, moving through a life, seeking to express that Spirit in any way he could: the art of photographs and music and words and tweets and videos."

Friends expressed sadness at Anderson's departure. Rev. Paul Bryant-Smith capitalized on Anderson's education in the world of drama to role play a skit in which Anderson had to play the role of Bryant-Smith, the one left behind as his friend moved to Hawaii. Bryant-Smith added to an already humorous event by dressing Anderson in winter hat and parka, and even adorned him with a snow shovel before launching into a duet of Israel Kamakawiwo'ole's "Somewhere over the Rainbow/What a Wonderful World" medley complete with Ukulele accompaniment.

A video released today by the CT Conference shows highlights of the event, including excerpts from speakers, a piece sung by First Church's Chancel Choir, and a performance by Anderson, Bryant-Smith, and Anderson's daughter, Rebekah, of Bill Staines' "Crossing the Water."

Drew Page is the Associate Editor for the Connecticut Conference UCC, and considers Anderson a dear friend and mentor who will be missed.