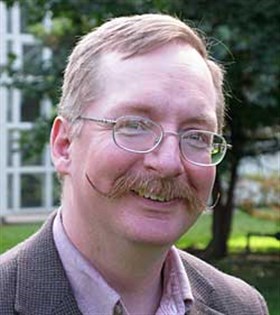 HARTFORD (01/05/2016) -- In a letter to church leaders in Connecticut today, Conference Minister the Rev. Kent J. Siladi announced that the Rev. Eric Anderson will depart from his role as Associate Conference Minister for Proclamation, Identity, and Communications in March. Anderson has served the Conference staff for more than 17 years. He will begin a new role as the senior pastor of the Church of the Holy Cross UCC in Hilo, Hawaii, in April.

"This news is bittersweet," said Siladi. "Eric has been a valuable member of our staff for 17 years with more job titles than anyone in CTUCC history! He has been the center of our communications ministry and has been invaluable in helping us articulate our mission and our ministry."

During his 17 years of ministry with the Connecticut Conference, Anderson says he has witnessed a radical expansion of digital media in the work of the church. The use of email, websites, online services, and social media was nearly non-existent when he began his work in Hartford. Under his leadership, the Connecticut Conference has been a pioneer in using these emerging communications instruments, including regular audio podcasts and video productions as tools for communicating and proclaiming God's work.

"I've learned a tremendous amount about communication by new means," said Anderson, "and I believe that many of them are well suited to supporting the life of a worshiping community. I hope to use these new techniques to engage people in learning, prayer, and preparation for mission throughout the week."

Anderson says he has also seen a shift in the attitudes of churches toward their neighboring congregations.

"I've learned that we local churches are not in competition with each other. If we are competing with anyone, it is with the notion that community, compassion, and commitment to Christ do not matter in the world. I believe otherwise, and a good deal of what has inspired me to believe that is what I have seen and heard in the Connecticut Conference."

The Church of the Holy Cross is one of four UCC churches in Hilo, a town of nearly 40,000 people on the main island of Hawaii. Though many churches in Hawaii were established through congregational missionaries, often from New England, Holy Cross was founded by a Japanese mission agency with ties to the American Board of Commissioners for Foreign Missions, which later became the United Church Board for World Ministries. The congregation of nearly 200 is made of predominately of Japanese heritage. Anderson is looking forward to bringing the message of God's love to any and all in Hilo.

"I look forward to regular leadership of worship once again: to proclaim the love of God in Scripture, song, and story; to lift the joys and sorrows of a congregation to Christ in prayer; and to invite the blessings of the Holy Spirit upon us through the sacraments of baptism and communion," he said.

In addition to 17 years in media with the Conference, Anderson has also had a regular role at Silver Lake Conference Center, serving as a counselor, dean, and chaplain during the summer season. It is no surprise to those who have attended the summer programs that Anderson's most recent call can be traced to a moment that took place during one of his weeks at camp.

"A few years ago," he explained, "while serving as chaplain, I took part in a Silver Lake tradition. As the conferees and staff come forward for communion, the chaplain invites those who wish to come to them for a blessing. I watched those faces light up as I extended God's blessing, one by one, to each person, and that's what I hope I can do in Hilo: offer a means by which God might work in people, and by which they will know they are blessed."

A farewell service for Anderson is being planned for February 21 at 3:00 pm at First Church of Christ Congregational UCC in Glastonbury. For details, contact Emily Hale, Office Manager of the Connecticut Conference, at 860.233.5564.

Drew Page is Associate Editor for the Connecticut Conference UCC.