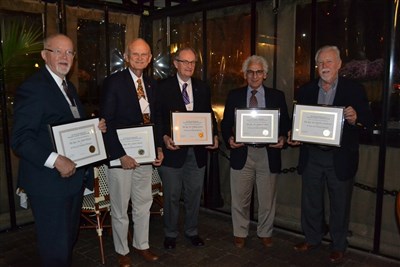 The 50th ordination anniversaries for the following Massachusetts Conference clergy were celebrated at the 2019 Annual Meeting:

The Rev. Dr. William Boylan was ordained on November 30, 1969 and lives in Massachusetts.

The Rev. Mr. John E. Cupples received his A.B. from Raymond College, University of the Pacific, Stockton California, and his M.T.S. from Harvard Divinity School, Cambridge, MA.  He was ordained at Eliot Church of Newton, MA on June 15, 1969.  His ministry was extra-parochial and he is a member of the Church of the Covenant in Boston, MA.

John has served on the Committee of Religious Concern for Peace and has been the Regional Director of Clergy and Laity Concerned, Boston, MA and New York, NY (1968-1974).  In his career, he has served in various capacities in community health, hospital management and consulting to community health organizations serving the poor.

He is married to L. Adrienne Cupples and has two daughters, Amy and Alison, and three grandchildren, Jackson, Samantha and Ixchel.

The Rev. Dr. William S. Geertz received his B.A. from Pacific University, Forest Grove OR, and a B.D. and D.Min. from Andover Newton Theological School, Newton, MA, and holds certificates in Spiritual Direction from Saint Joseph Spiritual Ministries in Brighton, MA.  He was ordained on September 28, 1969 at First Parish Church UCC in Dover, NH.

Currently, he has a part-time spiritual direction practice, and participates in a retired clergy Community of Practice.  He is on the Board of Directors of Health Signs Spiritual Life Center, plays the flute with New Horizons band of Cape Cod and sings with the Dennis Union Church Singers.  He also is on the planning committee for the Craigville Theological Colloquy.  Bill has a son, daughter-in-law and a granddaughter.

The Rev. Dr. Calvin F. Mutti received his B.A. in Philosophy from Heidelberg College, Tiffin OH, an M.Div., and two D.Min. (one honorary) from Eden Theological Seminary in St. Louis, MO. He was ordained in 1969 at the Jerusalem United Church of Christ, New Philadelphia, OH in the Eastern Ohio Association, Ohio Conference.

He served at the St. John’s United Church of Christ in Michigan City, IN (1969-1973), Bethlehem United Church of Christ in Evansville, IN (1973-1988), and South Church in Andover, Andover MA (1989-2007) where he was honored as Pastor Emeritus in 2018.  Cal retired from full ministry in 2007 and moved to Cape Cod.  In addition to interim and bridge ministry at Cape Cod and south shore churches, he has become certified as a Master Gardner and teaches at the Lower Cape Children’s Garden.  He is founding President of the Brewster Community Solar Garden Cooperative, serves as a land monitor for the Brewster Conservation Trust, and sings with the Chatham Chorale, Dennis Union Church choir and Cape Cod Symphony.  He serves as a neighborhood welcome, grows giant pumpkins and is a beekeeper.

He and his wife Karen met in college and are now celebrating their 55th anniversary.  They have a son Michael, his wife Denise and their daughters Hannah and Makayla in Cleveland; and daughter Marci, her husband Mark and their twin sons Alex and Zach in Austin, TX.  He thanks God everyday for being called into Christian ministry, and to function as a pastor in the United Church of Christ, a denomination committed to boldly embodying God’s love and justice.

The Rev. Mr. Charles T. Newberry was ordained on October 29, 1969 and resides on Cape Cod.

The Rev. Mr. Roger Paine received his B.A. from Washington & Lee University and his M.Div. from Yale Divinity School.  He was ordained in 1969 in the Twin Cities West Association in Minnesota. He served Plymouth Congregational Church in Minneapolis, MN (1967-1970), Trinity United Church in Niederwald, TX (1983-1984), and The First Parish in Lincoln, MA (1996-2014).

Other ministries include Executive Director of Relate Youth Counseling, Minnetonka, MN; Executive Director of People’s Community Clinic, Austin, TX; and Executive Director of Interface (adult education center), Cambridge, MA.  He is currently a novelist and is author of We Never Had Any Trouble Before – First Aid for Parents of Teenagers (1975).  Roger is married to Kay Paine, they have a daughter, Catherine Smith, and two grandchildren, Olivia and Max Smith.

The Rev. Dr. Paul D. Sanderson received his B.A. from University of Massachusetts, Amherst, and an M.Div., an S.T.M in Psychology and Clinical Studies, and a D.Min. from Andover Newton Theological School.  He then received his Ph.D. from Boston University in Psychology of Religion and Pastoral Counseling.  He also has a diploma from the C. G. Jung Institute, Boston, MA.  Paul was ordained in January 1969 in the Essex North Association at the Maple Street Congregational Church in Danvers, MA.  He served some churches as an interim and some as settled pastor, including Pawtucket Congregational Church, Lowell; South Church in Andover; Pilgrim Church in Southborough; Original Congregational Church, Wrentham; Church of Christ in Millis; Franklin Federated Church; and First Community Church in Southborough.

He has served as state mental hospital chaplain in Foxborough and Medfield; Executive Director, Pastoral Counseling Centers in Providence; and Adjunct Faculty in Psychology at Assumption College for 25 years.  He also is a Psychologist/Jungian Analyst in private practice.

Paul is strongly tutored in the relationship of Christianity to Tibetan Buddhism, twice undertaking a trekking pilgrimage through India, Nepal and Tibet.  Paul is married to Darlene Sanderson.  They have two sons, The Rev. Corey Sanderson and Jay Sanderson, and a daughter, Kristin Sanderson.

The Rev. Dr. Robert P. Shire received his B.S. from Boston University, Boston MA, and his D.Min. from Andover Newton Theological School in Newton, MA.  He was ordained on April 13, 1969.

Bob served as Pastor of Townsend Congregational Church, Townsend, MA, and as Senior Pastor of United Church in Walpole, Walpole, MA.  He is a founding Director of Project Place in Boston and a Capital Campaign consultant.  Bob is married and has a daughter.

The Rev. Ms. Shirley Wilcox was ordained on December 31, 1969 and resides in Hingham, MA.

In 2012, John was diagnosed with Parkinson’s Disease.  He then enrolled in the Parkinson’s Progressive Monitoring Initiative, which does research on Parkinson’s, and has continued to do volunteer work in that study.  John and his wife Joyce have four children between them and seven grandchildren.