By Eric Anderson, Minister of Communications and Technology for the Connecticut Conference UCC.

WOODSTOCK - The Boards of Directors of the Rhode Island, Massachusetts, and Connecticut Conferences came together on November 15th at the First Congregational Church UCC of Woodstock, Connecticut, for what they believe to be the first joint meeting of its kind in New England's history. "We discovered that there were lots of common ministries," said Connecticut Conference Minister the Rev. Kent J. Siladi, "and we began naming ways that we might cooperate together.

"It was an example of interdependent cooperation." 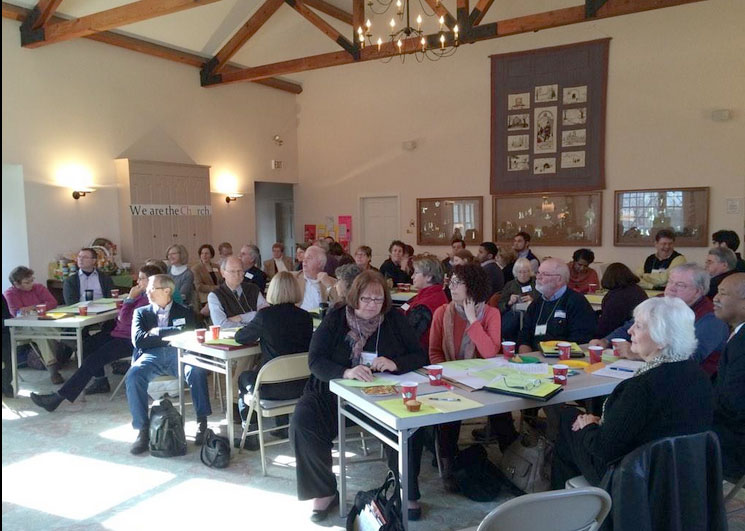 "I found the day inspiring and hope-filled," she continued, "and I learned things that will help me with my work as Board chair and as pastor in Bloomfield."

The Board members wrestled with what Massachusetts Conference Board Chair the Rev. Angela Menke Ballou, pastor of the Cotuit Federated Church UCC, described as "the deeper wonder about, 'How can we work collaboratively while still maintaining our individual identities?'"

"There is no crisis forcing us into these conversations," she declared. "We are choosing to have them now, so that we can do thoughtful planning about moving forward with more collaboration from our strengths."

The assembly did not make "nuts and bolts" decisions during the retreat, but did make commitments to further areas of conversation. Board and staff members from the three conferences volunteered to continue the work in six areas: Rev. Blood believes that the areas raised will give some direction to Conference Ministers and their staffs.

The physical setting of the Woodstock church lent itself to the day's work, said the Rev. Ruth Hainsworth, pastor of the United Congregational Church UCC of Westerly, RI, and Clerk of the Rhode Island Conference. "It's an old church out in the middle of the countryside, and we were meeting in an addition that was very modern and up-to-date. The physical space was really representative of an attempt the link the past and the future."

The participants brought a real commitment to the conversation. "It appears that everyone here is, 'all in,'" the Rev. Ian Holland, pastor of the First Church in Swampscott (MA) Congregational UCC, observed during the meeting, and urged the group not to take that openness for granted. Participants from all three conferences shared a sense that some assumptions and anxieties had been overcome. Rhode Islanders wondered how their small conference -- which also functions as a UCC association -- would fit between two "mega-conferences." They knew they brought their own strengths.

"The advantage we have in being small," said Rev. Hainsworth, "is that we already have networking groups in place. People to people contact is what is going to move things forward."

The three Boards explored the strengths in each conference's current commitments in ministry: Rhode Island's focus on health ministries, advocacy in Massachusetts to address climate change, and the vitality of Connecticut's outdoor ministries at Silver Lake Conference Center. "Much can be gained from learning from one another," said Rev. Menke Ballou, "and capitalizing on what the others do well."

"It was surprising how natural it felt," Rev. Blood reflected. "Even a couple of years ago, it would have felt really radical, and a little scary -- and a little crazy -- to bring these boards together. Now it feels absolutely right.

"This idea of interdependence is just easier in a way that is unexpected."

Participants hope that the meeting will serve not just as a model for interdependent cooperation in ministry, but also as a first step toward helping local church leaders and members build their own connections across conference boundaries. Other events, such as the Super Saturday workshops which Massachusetts, Connecticut and Rhode Island now share, may be next steps. The important thing, said Rev. Hainsworth, is, "We're not alone. Everyone is trying to figure out the same problems together."

The Rev. Dr. Jim Antal, Minister and President of the Massachusetts Conference, compared the history of New England's UCC churches to map-makers who have been working separately, surveying their own pieces of ground, for four hundred years.

"On Saturday," he said, "we stood shoulder to shoulder looking out ahead, looking to the future, and imagining that we might map the terrain we now are facing together."

Reprinted with permission from the Connecticut Conference, UCC, website.