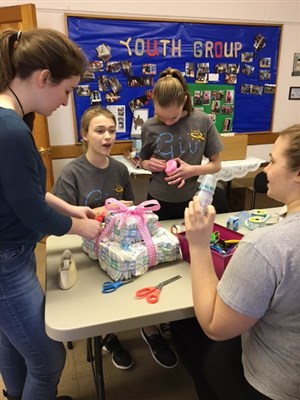 OXFORD -- This was a Giv2 (Give Squared) service event with a twist.  When kids and youth leaders met at the Oxford United Church of Christ, Congregational on January 28, they began the usual way with introductions and ice breaker games to get to know friends from other congregations.  But then, they prepared for a 28-day diaper drive.

"This is a service project that will last through the month of February and be an expression of caring for families in the Naugatuck Valley region," said Nancy Zeigler, coordinator for the event.

The group heard from Megan Tarby, Executive Director of Connecticut Partnership for Children, who said: “Our mission is to provide for basic needs that help young children grow and thrive. We have a variety of programs that help children from low income families.  Depending on a child’s weight, families spend 14 to 25 cents per diaper. This is an expense that adds up, especially if a child gets sick.”

“We provide 25% to 40% of the diapers a child may need for up to one year,” continued Tarby. "This is not a handout, but a boost for families who are struggling. In the process we develop relationships with parents and provide support for nutrition, education, and warm clothing.”

After the presentation, youth got creative and planned the #28daysofdiapers campaign.  They made ‘diaper cakes’ and bright posters to serve as eye-catching displays for their churches.  They also came up with a commercial message to share in worship announcements.  The goal is to collect at least 1184 diapers during the next 28 days.  This is the number of diapers that an infant would use in the first six months of life.

“I became aware of this agency and stopped in to ask how our Giv2 youth could help out. Megan told me about the diaper drive and brought this idea back to our Giv2 group,” said Zeigler, a lay leader from Oxford UCC. “We thought we would set up a friendly competition between our congregations to see who could collect the most diapers.”

“We asked about cloth diapers but found out that health laws prohibit washing them in commercial laundromats.  Most of the clients do not have their own washing machines so they depend on disposable diapers,” said Cyndi Lango, a youth leader from Mill Plain Union Church.

Tara, a student from Southern Connecticut State University who is serving as an intern with the agency, provided inspiring testimony as part of the presentation.  She told youth (among them at least one who is considering a career in social work),  “I want to do more than just help one person at a time, I would like to help and entire community so that all children can reach their potential.”

Donations may be left at Mill Plain Union Church in Waterbury or Oxford United Church of Christ.