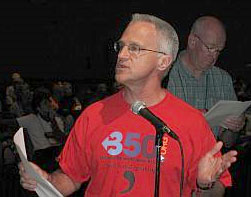 Conference Minister & President Jim Antal is spending the week in Washington DC with other religious leaders from around the country in support of Pope John Francis' call to action on climate change. And he's asking MACUCC members and friends to get behind those efforts.

Antal will be joining United Church of Christ General Minister and President John Dorhauer, Trinity UCC in Chicago Pastor Otis Moss III and others at a two-day event, Coming Together in Faith on Climate. The event is co-sponsored by five organizations, including the Center for Progressive Renewal, a partner of the Massachusetts Conference, and Blessed Tomorrow, a coalition of people of faith of which Antal is a leader.

The Coming Together event is bringing together Christian, Jewish, Muslim and other national religious leaders at the National Cathedral on Sept. 24 and 25 to express inter-denominational support for the Pope’s call to action on climate change and creation care. Pope Francis will give an historic address to a joint session of the U.S. Congress on Sept. 24.

"I believe that climate change is the most pressing moral issue of our time," Dorhauer said on ucc.org. "If we fail to resolve this crisis, in time every other justice issue will be settled by a planet that will lose its capacity to sustain human community as we know it."  (See also Dorhauer's Huffington Post article: Burning Down the House, Sept. 21, 2015)

Pope Francis ramped up the worldwide discussion on creation care with his Encyclical letter, Laudato Si, released in June.

Antal recently urged every pastor and every congregation to join the Pope in taking up the cause of climate change. 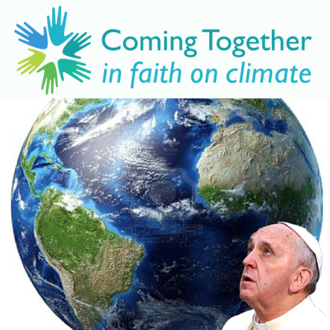 "Climate change is the greatest moral issue humanity has ever faced.  If you are a pastor who has yet to engage the issue from your pulpit, the time has come.  If you are in a congregation which is yet to engage the issue and step up to the defining challenge our generation is facing, the time has come to speak with your pastor and chart a course of commitment," he said.

This week, Antal is urging MACUCC members and friends to join him in signing a letter that will be presented directly to Pope Francis.  The letter was written by prominent Christian pastor, author and activist Brian McLaren.  McLaren recently sent the letter out with the following introduction:

I might not be Catholic, but the Pope's leadership has inspired me, and millions of others, to step up and speak up as never before about climate change and the plight of the poor.

And boy, do we need him right now! Our Earth and the most vulnerable are crying out from the pain of climate change and inequality — all the while many political leaders peddle in misinformation and demagoguery.

When Pope Francis begins his trip to America in the next few days, we need him to be bold in delivering his message about the inherent dignity of the earth and ALL of its people.

Yet Catholic and non-Catholic opposition to the Pope's message is building — some are even calling on the Pope to “tone down” his message to our political leaders!

Will you join me in encouraging Pope Francis to be bold and courageous when he speaks to Congress? We’ll deliver our letter directly to the Pope and his aides, showing him that faith leaders and people of faith stand ready to echo his message.