When the members of The Eliot Church of Newton, UCC became aware that approximately 66 families were housed in two local motels -- one within three miles of Newton’s border and the other within six miles -- they knew they had to do something to reach out to that community. It was disheartening for the church members to know that although the families were sheltered, they did not have access to full kitchens, transportation, or playgrounds for the children, and they wondered what they could do to help. (See Pastor Susan Brecht’s blog article regarding homelessness.)

The seeds were planted two Sundays before Easter when a member who runs an agency that develops affordable housing, got up during announcements with an idea to provide an Easter dinner for families living in one of the nearby motel shelters. Volunteers signed up, donations were collected, and an invitation was sent out. Two families from the shelter accepted the after-worship dinner invitation.

“One member provided rides for a family. The event organizer, another church member and his extended family, and I cooked and hosted the dinner,” explained The Rev. Susan Brecht, pastor of the church.   “So we outnumbered our guests that day.” 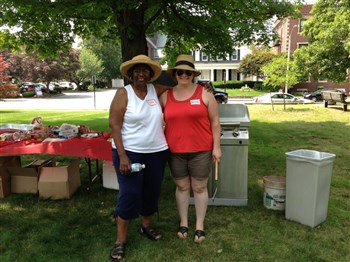 “Despite the low attendance, it turned out to be an interfaith event,” she said.  “Christian, Muslim and Jewish families sat together for an Easter feast.”

Interfaith fellowship wasn’t the only good result of the event. The Jewish wife of one of the members who participated was so moved by her conversation with a single mom with two children that she is now looking into starting a mother’s support group for women living at the motel.

That event also spurred more thoughts from the members about how they -- a people of faith who are called to reach out to those who are suffering -- could bring a little joy into the lives of these families, especially the children.  Their answer was to host summer cookouts for the homeless families.

Cookouts on the church grounds were held on four Sunday afternoons. The church provided a meal, fellowship, and open space in their playground and adjoining park for the children to run and play. Twenty guests arrived for the first cookout, thirty for the second and third, and then fifty for the fourth event.

The cookouts were truly an all-community experience.  Volunteers from The Second Church in Newton, UCC, The Unitarian Universalists, and employees from a local bank joined with those from Eliot to cook, organize games and crafts, and visit with the parents. Car seats were donated for drivers from Eliot, and the Boys and Girls Club provided a small bus. Local markets provided food. Other congregants gave monetary donations.

“Our guests thanked us over and over again,” said Brecht.  “They loved the food, and in some cases got to take some of it home with them. But most of all, they were appreciative that a church actually cared enough to do this. I sat with a couple of adult guests over lunch at one of our cookouts, and listened to why they had left organized religion. I would not have gotten a chance to hear these stories without the cookouts.”

Those from outside the church who helped host were so excited that they asked to be involved in planning more events.  The church moderator said the events were transformational for him. Most of his time prior to this was spent in meetings talking, and very little time was spent doing something meaningful. He felt that time got ‘flipped on its head’ this past summer.

The church is now looking at what they can do on a monthly basis to deepen their relationship and give assistance to those they have gotten to know over the summer. One of their goals is to get to a place where anyone walking in the door would not be able to tell a host from a guest.

Brecht explained: “In Chapter 2 of the Letter of James, he tells the early Christians: What good is it my brothers and sisters if you say you have faith but do not have works? Can faith save you? If a brother or sister is naked and lacks daily food, and one of you says to them, ‘Go in peace; keep warm and eat your fill,’ and yet you do not supply their bodily needs, what is the good of that? So faith by itself, if it has no works, is dead.’  This could be my mantra. It’s by our works, our reaching out to those in need in our communities that the church can be renewed in mission, energy and spirit, and ultimately the wider church’s reputation can be rehabilitated.”

The mother with two children who went to Easter dinner came back to attend the cookouts over the summer and is now attending Eliot on Sunday mornings, with one of the members providing transportation.

“It was that first low-attended dinner that inspired us to do more,” said Brecht.