In June, there was plenty of buzz about the environment following the encyclical on ecology and climate change issued by Pope Francis. Conference Minister and President Jim Antal blogged about the pontiff's call to climate action and urged local churches to "affirm God's call to our generation to join together in common witness to save the Eden into which we were born."
Local churches are taking up the challenge. Two churches received the Green Congregation Award at June's Annual Meeting, and many others have taken steps to reduce their carbon footprint, clean up the environment, recycle materials into useful items,divest from fossil fuels, or incorporate green action into their everyday lives.
More recently, the  First Congregational Church in Melrose, UCC, (FCC) celebrated the installation of the largest non-municipal solar array in Melrose.  With 360 solar panels atop its roof, church leaders believe it is the largest solar array on a church worship facility in the Commonwealth.
The completion of the project was celebrated by the church at a ribbon cutting with the Melrose mayor and other city dignitaries.  The installation came as part of other sustainability initiatives at the church including a new roof, extensive weatherization, new lighting and a new floor made from renewable materials. 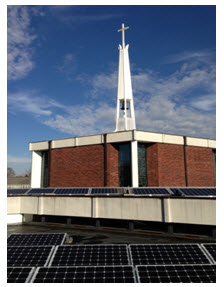 "Faith communities have a responsibility to respond to climate change," said Rev. Dominic Taranowski, pastor of the church.  "It is important to educate ourselves and pray about this crucial problem, but ultimately it is important to do something about it!  The solar array and the other sustainability improvements we have made to our facility represent our on-going response to God's call to be active stewards of God's creation."
The 101 kilowatt system is designed to provide 65 percent of the FCC's electricity, resulting in more than $7,000 in savings during the first year alone. Over the expected 30-year lifetime of the system, the solar array is projected to save $270,000 in electricity costs.
"Because we have electric heat, our electricity bills have become a significant burden so we decided to really move on this issue," said Jim Oosterman, Capital Campaign Co-Chair at the FCC.  "It's not only going to save us on our utility bills but also demonstrates our commitment to environmental responsibility. We'll be responsible for fewer greenhouse gas emissions since we'll be using less electricity."
The church is also using the solar array as an educational tool, teaching members and visitors about the benefits of renewable energy. "In the Narthex, we've created a sustainability station that will have pamphlets and displays about the solar panels and other energy-efficiency projects undertaken by the church," said Lori Timmermann, a member of the congregation who is a solar energy advocate and sustainability coach.  "Each month, we'll focus on a different area, such as recycling, home energy efficiency, the farmers' market and the value of local shopping."
The improvements to the church were made possible by means of a successful Capital Campaign spearheaded by a dedicated group of volunteers under the leadership of Capital Campaign Consultant Rev. Bob Shire.
The solar array is being financed by a power purchase agreement (PPA) with the contractor, 621 Energy. Through this agreement, First Congregational Church in Melrose is essentially leasing the solar panels in exchange for a guaranteed electric rate, which is lower than the standard utility charges. Thus the church is able to reap substantial energy and monetary savings without having to incur the full cost of solar installation. First Congregational was able to take advantage of the significant savings before the net metering cap became effective.
You can contact Rev. Taranowski and the rest of the green team at the church office at info@fccmelrose.org or 781-665-2111.