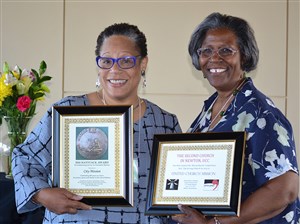 The Justice and Witness Council presented two Haystack Awards at the 217th Annual Meeting of the Massachusetts Conference, in recognition of exemplary work in the area of justice and charity. One went to a woman who works with homeless families both hands-on and through advocacy; and the other to City Mission of Boston. Here is what the Council has to say about those who received awards:

Josephine McNeil has worked tirelessly and with passion for many years on behalf of those without permanent housing. In 1994, she was a founding member of CAN-DO, a community-based non-profit housing development organization in the city of Newton. Under her leadership, this gifted attorney has developed 42 units of affordable housing in the city.

She has shared her skills, commitment and energy with Eliot Church of Newton, where she first organized an Easter dinner prepared and shared with residents of a nearby motel which provides families with temporary housing. When Muslim, Jewish and Christian families sat down together for an Easter feast, that was just the beginning of one community of faith’s efforts to bring joy into the lives of families living in isolation from the community and whose children have no easily accessible places to play.
The program continued with cookouts on Sunday afternoons - with up to 50 people sharing talk and recreation along with food -Thanksgiving dinner, and Valentine’s and Mother’s Day brunches. Second Church in Newton, the local UU church, the Boys and Girls Club and employees from Village Bank joined in to help cook, organize arts and crafts, provide car seats, transport families, and provide fellowship and support.

Josephine McNeil has put a face on the systemic problem of homelessness and challenged us to search for the big solutions, to join hands with others who share these concerns in order to make a bigger impact, and to share the stories of those whose lives are so impacted by this huge social problem.  She has a huge heart for each child of God without affordable housing.

City Mission is celebrating its 200th anniversary year as a force for justice, peace and charity in the city of Boston. With a mission to “catalyze action to root out poverty in Boston neighborhoods”, City Mission has been a leader in the city and a “go to” partner. Through programs like Lift Up (homeless prevention for single mothers), the Public Voice Project, Seminarians in the City, Boston Warm, social justice internships, and Boston Immersion, City Mission has provided “a good 200 years of good.”

Mission is the justice arm of the MBA, but churches throughout Massachusetts have connected to CM and its programs.  One example of how CM serves was in the winter of 2014-15 when Boston abruptly closed the Long Island Shelter in October. With cold weather on the way – what turned out to be one of the most brutal winters on record – City Mission called together faith and community leaders that led to the creation of Boston Warm. Not only did this program fill day time gaps in service to this population, they also advocated and pressed Boston officials to act rapidly, thoughtfully and compassionately.

The Rev. June Cooper, Executive Director, is a tireless voice and presence for the mission and purpose of City Mission. She is a powerful speaker and truth teller and combines the skills and knowledge of a social work executive with the pastoral/prophetic work of social justice, bridging communities and empowering action.

For our suburban churches, largely populated by white people of privilege, City Mission offers a bridge to widen horizons and build connections. By recognizing their work and ministry, we hope their story catches fire in our churches and spreads their catalyzing action far and wide.