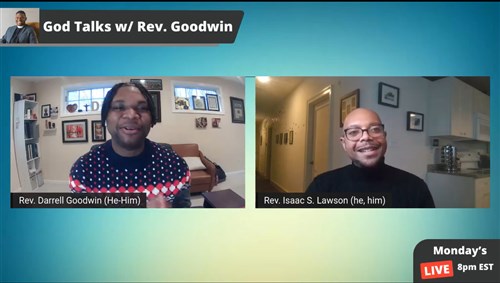 Rev. Goodwin begins all his God Talks interviews by asking his guest how someone else would describe them. Rev. Lawson said that while he was one of two clergy serving on the staff of the Center for Leadership and Justice, a group of community organizers, he said the running joke was that after he read Brian Stevenson's book Just Mercy, he always talked about proximity.

"No matter what, they will say 'Isaac is going to bring up proximity.' They also would probably say that I'm always going to bring questions. And that's how I've always sort of approached ministry. But even before ministry, as a little kid, I was the one who always said: 'But why? How come? Why? Why do it that way?' And of course that would bother my parents quite a bit, for me to constantly say 'why' or to keep pushing and pushing. And so they would I think describe me as someone who loves to question and loves to engage in dialogue and going deeper."

Rev. Lawson went on to talk about his previous dual role, serving both as a community organizer and as associate pastor at Immanuel Congregational Church in Hartford. In both places, he said, being relational - getting proximate - was key. At Immanuel, he and senior pastor Kari Nicewander felt they could not work with the congregation if they didn't know the congregation, so they split up the church directory and each set up calls with half the people in the congregation who were willing to talk.

In community organizing, Rev. Lawson said, being relational meant going beyond charity to building solidarity with people most impacted by injustice.

"We can talk about all of this stuff about walking on water, raising people from the dead - all of this stuff that we talk about in our Scriptures that's just amazing miraculous and inspiring. Why can't we bring that to the work of justice, right? Why can't we?" he said. "How do we continue as the church to dream big, empower faith, and put our faith into action?"

Rev. Goodwin asked Rev. Lawson to answer that question - how do we be relational while also engaging in transformative and prophetic ministry?

"The first thing that pops into my mind and I believe it with every fiber of my being - and it's part of the reason why my spirit really said yes to this role - is because I believe the only way we do it is together," Rev. Lawson said.

He went on to say that in organizing, two things are clearly needed to move the needle in a just direction: power and anger. And both of those things, he said, tend to make church people uncomfortable.

Rev. Lawson went on to say that we need something to do with that anger, so it doesn't turn inward and eat at us. That's when power comes in - the power to use that anger to bring about change. Rev. Lawson defined power as "organized money and organized people."

"And if we're honest, in a lot of our churches, we don't have as much money or people as we have had in some previous generations. And so I think the real power that we have is the power and our ability to do things together," he said. "And for me in talking about doing it together, that also then means together with one another and together with the Holy Spirit. And taking that serious, saying that we are moving in the power of the Holy Spirit and discerning where the Holy Spirit is leading us."

Rev. Lawson said doing things together could mean congregations joining with other congregations for things like youth ministry and faith formation programs, as well as working for justice.

Rev. Goodwin said he sees the Southern New England Conference as a tent, or umbrella of "all of the beautiful things that God is doing through our local churches." He asked Rev. Lawson how - in a setting where "congregational rugged individualism" is the norm - can groups find ways to come together around the central cause of Living the Love and Justice of Jesus.

"Is there a way in community organizing to maintain your own sense of presence and identity while also seeing yourself as a part of a collective whole?" Rev. Goodwin asked. "How do you maintain your uniqueness while at the same time seeing that we do have a symbiotic need for one another?"

Rev. Lawson said organizing starts not with mobilizing around a cause, but getting together in house meetings and getting to know one another and then asking: what keeps you up at night? What weighs on your heart, and your spirit?

"You show up not just advocating for someone else. You are showing up because you find that you too are invested in an issue. You start to find that you too are impacted by this issue. You start to see how your story intersects or intertwines with someone else's story," he said. Then, he added, the people who have found this common cause look together to find a specific issue that is "actionable and winnable."

Rev. Goodwin asked what the churches in Rev. Lawson's region can expect from him.  Rev. Lawson said that when he went to seminary, he did it with being prophetic - telling it like it is - in mind. Then, as a licensed minister, he served as a "minister of pastoral care" where he had to learn to listen more than he talked.

"I have learned that it didn't have to be either. I didn't have to say I'm either going to be pastoral or prophetic," he said. "I carry them both with me, because to me they're different sides of the same coin."

"Justice to me is about the love of God. It's about the wellbeing of God's people. It's about living with faith, right? With this faith that the beloved community is possible if we not only just work to build towards it, but if we do that imaginative work sometimes and just live into it, to dare to create it as we live into it. And I feel like if we can't do it in church, where we talk about grace and love and forgiveness, then where in the world can we do this fantastic experiment?" he said.  "So when you come to me, a church comes to me, they're going to get the pastoral listener. And then if I'm honest they are also getting that organizing training where, I want to know who you are and then give me a little time and I'll do a little agitating with you. But it's out of a place of love."

To hear more about Rev. Lawson's journey into ministry, watch the full interview: