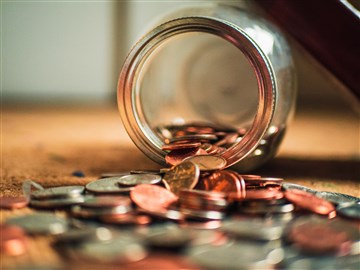 The Conference recently conducted a wide-ranging survey of churches, in which 260 churches participated. This is the first article in a series looking at the results, and focuses on the findings from the financial section.

A recent survey of churches indicates that their financial situations during the current pandemic are mixed - and that the willingness of church leaders to be vocal and transparent about the church's needs is crucial in maintaining a firm financial footing.

David Cleaver-Bartholomew, Transitional Associate Conference Minister for Stewardship and Financial Development, analyzed the results, and said the 40% of the churches that say their income is keeping up are primarily churches in which congregants have either paid their pledges early and/or increased them. He also said that churches offering an online/electronic giving option are generally doing better than those that don’t offer it. (Online giving options are outlined in this article.)

"The comments also show leadership makes a difference," Cleaver-Bartholomew said, "Churches that are the most stable have pastors and/or financial leaders who have openly and effectively addressed the situation, been clear about the church’s need, intentionally asked for people’s monetary support, and provided different ways for them to do so, especially through online/electronic giving."

On the flip-side, Cleaver-Bartholomew said, there are a variety of reasons given by the other 48% of churches for why they are struggling financially.

At the time of the survey in late April, seven churches reported applying for Payroll Protection Program (PPP) loan/grants. Four churches were successful, the applications for the other three were still “in process.”

Cleaver-Bartholomew said there are many questions regarding what the future holds financially for churches.

"Looking toward the future, many questions could be asked," he said. "The answers to these questions depends to a very great extent on how long the current social and economic restrictions are in place, how long it will be before people feel comfortable going out and gathering in public spaces, and how long before a quick, effective treatment and/or vaccine for COVID-19 are widely available."

As examples, Cleaver-Bartholomew said it's unclear whether congregants who paid their pledges early will make additional payments later on, and whether more churches will offer electronic giving and whether their members will become comfortable with that. He also pointed out that it is unknown when churches will be able to receive rental income again, and whether they might have success with online fundraisers in place of in-person ones. The long-term impact of investment losses is also unknown.

"How will each church’s leadership, pastoral and lay, respond?" he asked. "Will they effectively  address and be transparent about any financial difficulties the church may be facing, will they ask for monetary support, will they work in tandem with the congregation throughout this period and beyond it? Will there be a change in the ability to talk about money in the church?"

Church leaders have two upcoming opportunities to learn more in this area: