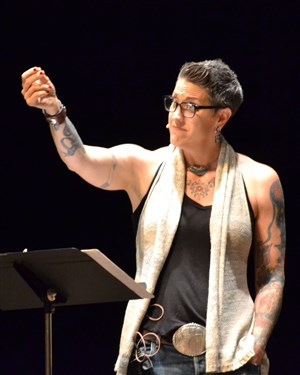 Nearly 700 people came to the University of Massachusetts Fine Arts Center this weekend to hear Nadia Bolz-Weber – the Lutheran pastor and author considered by many the “Face of the Emergent Church”  – expound on the state of the church today.

By all accounts, they were not disappointed, as Bolz-Weber, dressed in a tank top that showcased her tattoos, read from her upcoming book and then took questions submitted by audience members. The event was the keynote speech of the 216th Annual Meeting of the Massachusetts Conference.  It was open to the public, and endorsed and publicized by the New England Synod of the Evangelical Lutheran Church of America and the Massachusetts Council of Churches.  The ecumenical audience included Episcopalians, Lutherans, Quakers, Unitarians and others.

Following are a sampling of the topics Bolz-Weber touched on:

What postmodern church looks like
An important thing to keep in mind in these postmodern times, Bolz-Weber said, is that people today do not trust institutions, and do not grant them authority in their lives.

“Every institution has disappointed us,” she said, citing Watergate, the clergy sex abuse scandal and the banking system meltdown as examples.

“Right now, personal experience has more authority than it has ever had at any time in human history,” she said, adding that whenever the way a person experiences an institution does not live up to that institution’s message, trust is lost.

That’s why, she said, some people are turned off just by walking into a church and seeing the front third of the space dedicated to the one or two people considered to be in authority.

At her church, the House for All Sinners and Saints in Denver, Colorado, worship is conducted in the round. Instead of bulletins and hymnals that can be full of coded language, participants are given booklets that contain all the elements of the service, including the hymns printed with their music.  Some booklets are marked with instructions for the person holding that book to lead a part of the service – be it a Scripture reading or co-celebrating communion.

“We are anti-excellence, pro-participation,” Bolz-Weber said. “People are trusted right away with the holy things. People are engaged because they are trusted.”

Letting go of predictably and control results in amazing participation, she said. 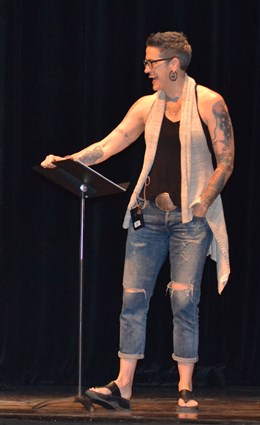 “People have the same desires,” she said. “But the delivery method has changed.”

Likewise, she said, people not wanting to serve on committees doesn’t mean they don’t care about the church.

At her church, Bolz-Weber said, worship planning is done at seasonal planning sessions to which everyone is invited to come and participate.

Church as a place of pastoral care
Bolz-Weber read from a chapter of her upcoming book in which she reflects on her reaction, and her congregation’s reaction, to the school shootings in Newtown, CT, two weeks before Christmas in 2012.

Three things tend to happen in churches after such events, she said. One is – nothing. Two is that the pastor downloads a “dry prayer from a denominational website” and reads it. Or three, the pulpit “becomes a soapbox for whatever issue the pastor feels passionate about” that relates to the tragedy.

“I dismiss all three of these,” she said.

Instead, she said, churches need to reclaim themselves as places of pastoral care in those moments.

“I think about the brokenness of the world and what is the role of the church in that,” she said. “How do our traditions let us pastorally hold people who have been through shared trauma?”

At her church, Bolz-Weber said, they lit candles for the victims of the shooting – including, as difficult as it was – for the shooter himself, who took his own life.

“People still need the church,” she said. “They are still interested in having a sacred way to contain or hold the hard things in life.”

Photos by Marlene Gasdia-Cochrane. Below, the crowd at the Fine Arts Center. 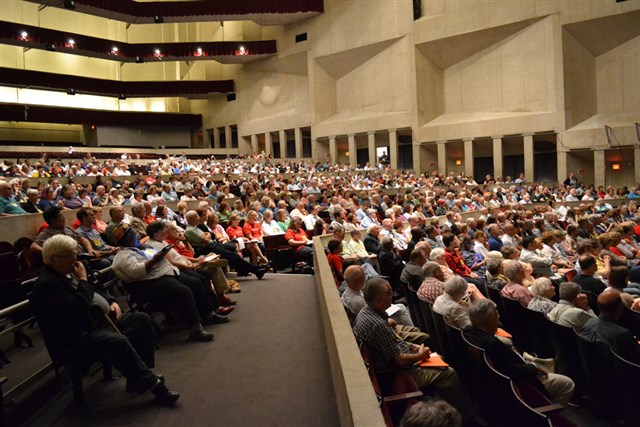