The members of Christ Church United, UCC, in Lowell did some soul searching a few years ago in a listening and visionary process that took over a year to complete. They recognized that on the outside they looked like a typical inner city church in trouble. The congregation, while lively, spirited, and growing, is small. The costs associated with maintaining their historic, cavernous building are big and burdensome. When they look outside their doors, they can see homeless people walking on their street and sleeping in cars because they cannot afford apartments. 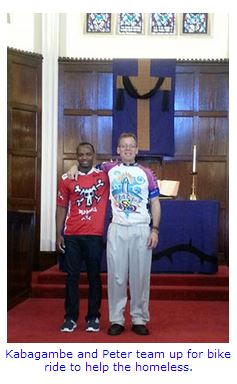 Despite their challenges, the members decided to make some bold decisions. They began with a mission statement: Christ Church United in Lowell stands for being loved by God, loving our neighbors, and walking the way of justice. Then they made it their mission to take seriously the call to open their doors wide and extend radical welcome to all God's children, including those homeless right outside their front steps.
"As most everyone knows, we have a crisis of homelessness that is plaguing our families, individuals and communities, as it has for many years," said Pastor Peter Lovett, in an article for the Greater Lowell Interfaith Partnership to End Homelessness. "In spite of great effort from good-hearted people and committed institutions, and the fact that the City of Lowell has a ten-year plan to end homelessness, the crisis continues. The demand for permanent housing for the homeless is great. The need is urgent."
So the members of Christ Church decided to offer their own building, and turn their fellowship hall into five units of affordable housing for families. This would benefit both the community and the church itself (via upgraded facilities and lower operating costs). Chris Plourde, a member of the church, said "There are more than 15,000 homeless in Massachusetts, and 119 families and 205 children are homeless in Lowell. It's important to know that the church felt passionate about this and needed to do something about it."
The members started a capital campaign with a goal of $175,000 and showed their support by surpassing that amount in pledges. They did research, and then applied for, and received, several thousand dollars in grants from foundations and a local bank. They attended several community and city events, and built relationships with people who were willing to lend their talents and energy. In fact, Lovett met an affordable housing consultant as well as an architect who is a member of a sister UCC church-both contributing invaluable knowledge and time to what Christ Church is now calling "All Souls House."
However, since their bold decision to take action, their vision has had to change. While working with state and local housing developers on their plan to turn the fellowship hall into suitable living spaces for homeless persons, the economy took a downturn, public government funding dried up, and the costs involved became more daunting than anticipated. But instead of giving up, the members got creative and even more enthusiastic.
They took their dark, dank basement, did some painting and some decorating, and openedUnder the Oak -- a day shelter providing food, fellowship, and respite, where someone can "have a warm meal, watch television, or even take a nap," said Lovett. A separate 501C3 non-profit organization has been created in order to attract donations from people who may want to help the homeless, but who may hesitate to give to a religious organization. "Under the Oak has brought in ten new active people into our church, and a new burst of enthusiasm," he continued. "Reaching out to the community in a real way is exciting and enlivening our congregation, which is leading to growth and vitality." That activity is getting others in the community interested, and even contributing to their capital campaign.
"We have learned a lot over the past few years and are in the process of figuring out how to best meet the need whilst dealing with a financial challenge," said Plourde. "So our housing project may take on a different 'façade' than our original All Souls House plan. Reducing the number of apartments to be developed, or even purchasing property, may actually be more feasible right now than tackling the total redevelopment of church facilities which may take much longer." In fact, they are looking at alternative ways to get repairs done to the building, so the building upgrade project doesn't overshadow their real mission to give shelter to the homeless.
"There is a lesson to be learned here," said Lovett. "Churches who have budgetary constraints and face challenges need to think boldly because Christ-like initiatives can come to pass. I know it can seem difficult to think that way, but our communities have people who want to be part of solving serious concerns, and the church is called to be that central place where the Good News can be shared. There are people right outside our doors who can help us attain those bold ideas and move us into the 21st century. Because God is Still Speaking."
Rev. Lovett and Chris Plourde can be reached at the church office at 978-459-9631 or send an email via their website at (http://wewelcomeall.org/).
PHOTO NOTE:
Last year, on a fundraising bike ride from Cleveland to Buffalo, Lovett made a stop at the UCC's national headquarters, and commented to a UCC reporter that his church's vision to provide homes for the homeless represents a local church having the "vision and energy to transform itself for a new century so that it can stay alive and not simply fight over loose slates or a leaky roof, but set itself up for the future."   The last leg of Lovett's bike ride will take place in June.