For five Tuesdays during Lent, 12-20 members from the Townsend Congregational Church, UCC, St. John's Roman Catholic Church and the Townsend United Methodist Church gathered at Bailey's Bar and Grille, a local restaurant. Each week the participants shared both a 'pint' and their thoughts as to what different lines of the Lord's Prayer meant to them.

According to Andy Gustafson -- a member of the Townsend church (as well as a staff member of the Massachusetts Conference) who initiated and facilitated the "Lord's Brew" program -- there were certain ground rules for participation. First, the program was about sharing, not about being taught what was right or wrong.  In that regard, there had to be respect for everyone at the table as well as for other faiths.  In addition, each person was responsible for paying for his/her own food and beverages. 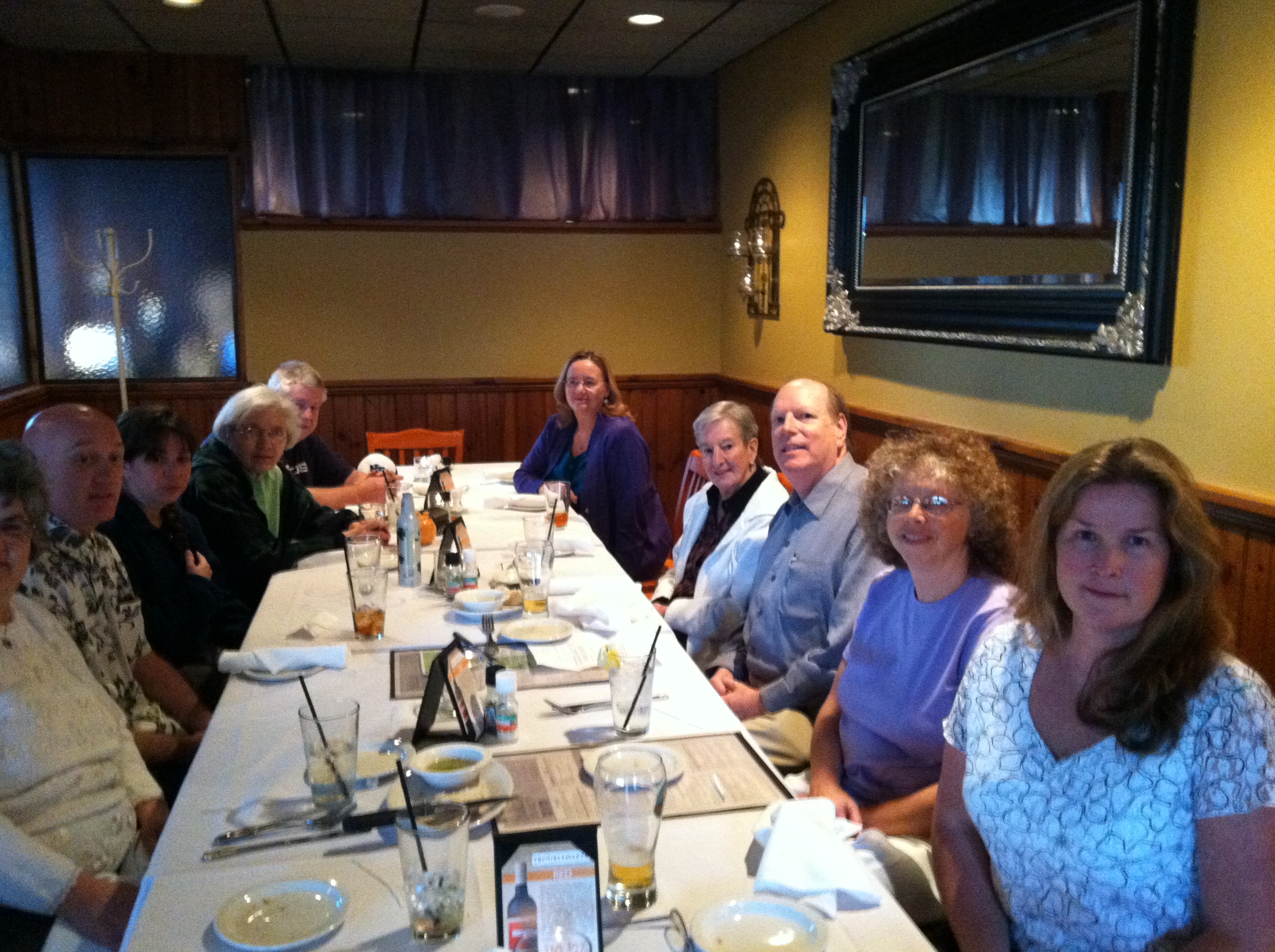 Gustafson modeled the Lord's Brew after a 'pub theology' program developed by Rev. Dana Allen Walsh, an associate minister at Hancock United Church of Christ in Lexington, who gathers young adults in Boston for faith sharing and "theology on tap."  Instead of driving into the city, however, Gustafson chose a local restaurant, whose owners were supportive of the church and community and more than happy to reserve a quiet section of the restaurant on a weeknight.

"Although some people may question the venue, the presence of alcohol did not seem to be problematic at all," said Rev. Shayna Appel, pastor of the church. "I'm sure there are folks for whom a bar is NOT the best place to be for any reason, so we continue to offer learning opportunities at the church. But those who participated really enjoyed the atmosphere, discussion, and fellowship...present company included!" she said. "This is just one more way to meet people where they are, and in this day when so many are not churched, that's important."  Appel explained that although everyone in this year's group was churched, if they continued the program next year, they would try to reach out further.

"The venue also gave us a chance to engage in some good ecumenical relationship-building in a relaxed way where we felt more like friends gathering at the day's end for a bit of theological reflection," Appel said.  "It reminds me of the way they did it in the old days...old as in when Jesus was still with us and table fellowship was common."

The mixture of beliefs, as well as using the Lord's Prayer as the topic of discussion, provided a deep sharing of faith among those who sat at the table. Gustafson purposely chose the Lord's Prayer because he felt it was a prayer that everyone knew, whether one was Catholic, Methodist, or UCC. "The prayer covers a lot of theological questions -- about forgiveness, the issue of sin and evil, God's kingdom and will -- and touches a lot of issues that we have in our beliefs and how we live our lives," he said.  "It prompted a rich discussion with many different perspectives and stories."

"At the end of the day, inviting folks out for drinks is easier than inviting people out for bible study," said Appel.  "However, as it turns out, some folks are more than happy to combine the two!"

Besides a sharing of faith, another benefit of this unique location was the sharing of fellowship. Gustafson explained that a number of people stayed afterward and had dinner together -- "people who would not necessarily dine together otherwise."

And just maybe, some people would stay later to have one more prayer for the road.