SPOTLIGHT: It's No Mystery How Church Found Path to Deepened Personal Prayer

SPOTLIGHT: It's No Mystery How Church Found Path to Deepened Personal Prayer

A small group of East Congregational Church, UCC of Milton members -- gathered together under the name "Approaching Mystery" -- was exploring personal prayer practices when they decided to focus on the practice of walking meditation. The church had chosen "Searching for God" as its seasonal theme, so this practice seemed fitting.

The classic example of a walking meditation involves a labyrinth. Labyrinths differ from mazes in that one can't get lost because the path is unicursal, which means there is only one path; the way in and the way out are the same. While the cognitive, decision-making portion of the brain is relieved of its responsibilities, the walker still has to remain alert and aware in order to stay on the path. It's a perfect setting for meditation because one must remain attentive and present, but because there are no cognitive demands, the walker is free to quiet his or her mind and listen for the divine.

However, East Church had no labyrinth on which to walk.

After doing some research, we found portable indoor use canvas labyrinths available for rent, but the group decided that a more permanent labyrinth would garner continued use and enjoyment by both parishioners and the wider community. So, it was decided a large, outdoor labyrinth would be painted on the parking lot behind the church. One minor issue with using the parking lot is that often the labyrinth is at least partly inaccessible due to parked cars. (There was some joking about the possibility of visitors becoming confused and parking in a circular pattern, but so far so good.)

The group chose to model their labyrinth after the beautiful, classic 12th century labyrinth found in France, at Chartres Cathedral. Because of its renown, the patterns are readily available online, but after hours of study we were unable to discern a predictable logic to the twists and turns. Ultimately we just had to deconstruct the pattern and turn it into a recipe which could then be enlarged to its final size of 60 feet in diameter.

Volunteers were recruited to paint the labyrinth. We planned the painting event to take place the weekend before the first walking. The Approaching Mystery meeting was announced to the members and the wider community via the local media. This was a huge leap of faith, given that the local weather forecast looked terrible for the planned painting weekend. 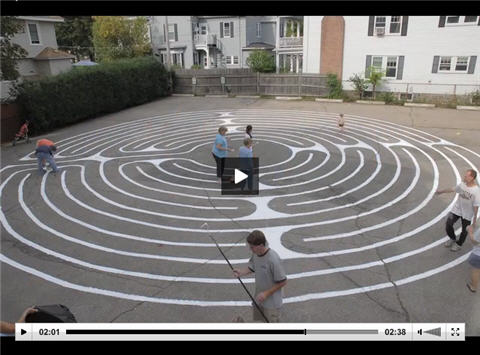 Luckily, the day came and the weather cooperated. Approximately 16 optimistic volunteers showed up that Sunday, ready to work. We were thrilled that the age range of our team of volunteers included a kindergartener at one end, youth, young adults and middle-aged in between, and an octogenarian at the other end.

During the morning's service, Co-Pastor Rev. Sara Marean included the topics of mystery and labyrinths in her sermon, which helped deepen the experience. After service, we got to work on the painting -- which took almost five hours to lay out and paint. We marked the pattern out in chalk first, just in case corrections needed to be made. The team, all of whom were beginning to realize "how cool this was turning out," walked it exuberantly (and not at all meditatively) to ensure no mistakes had been made before it was made permanent with paint.

Two days later we walked it deliberately as a community.

We believe the labyrinth has made impressions on the musicians who use the church to rehearse and the parents of the nursery school students who use the building. Also, passersby have been observed walking it, and reading the hand-out we have provided in a weather-proof box.

The project showed how an enthusiastic group can cooperatively achieve something grand. This wasn't done by a committee, it wasn't done by a tight group of friends, and it wasn't done by that small inner circle of people who always do everything at a church. It was done by a group of people who connected with this project and who did something big and lasting together. The fact that an enthusiastic and committed group rallied together to create it has become something intrinsic to the fabric of our congregation. As some level, that resonates with and strengthens the whole community.

Editor's Note: Want to know how East Church accomplished the Labyrinth project? Spend two and a half minutes watching this video. If a picture may be worth a thousand words, this time-lapse video is worth a million.

For detailed information on how the church did this project,  please visit the church's Labyrinth Project Web Page. Scroll to the bottom of the page to download a Do-It-Yourself Manual!