The First Congregational Church in Winchester, UCC spent five weeks doing an intergenerational program where they purposely made all aspects of the church, including worship and Bible studies, inclusive for all ages.

The theme of the winter program was "Living Your Sundays in a Monday to Saturday world" and it was the hope of Rev. Judy Arnold, Associate Pastor, that the message of keeping a Sunday Spirit alive all week long would resonate better with both adults and children if they experienced Sundays in an intentionally intergenerational way.

"Some members got to church very early in order to help serve breakfast snacks before classes," said Arnold.  "Then both parents and children attended class from 9:00-10:00, and teens helped out the younger classes."

The intergenerational group worked together to bake the bread that would be used during Communion Sunday and learned the lesson of being thankful all during the week for nourishment received. Some classes involved field service trips - like 'secret' snow shoveling at houses where people were not home - in order to understand how to experience gratitude without being thanked.  Some adult classes contained some of the same lessons the children were working on - including writing prayers to be used immediately in worship and learning music that was not included in hymnals.  When class was finished, a bell was rung, signifying it was time for worship to begin. 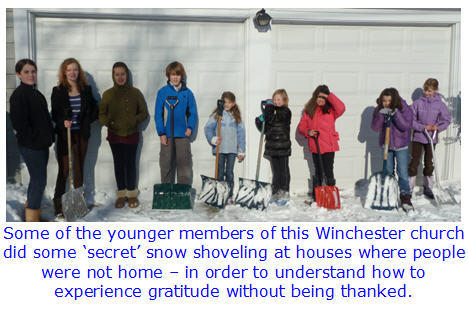 "It was sometimes difficult to distinguish where class ended and worship began," said Arnold, "because adults and children walked from class into worship singing the newly learned songs."

Both worship space and worship service underwent some significant changes.  Arnold felt that one of the most important changes was to the architecture, including unbolting the first three rows of pews and reconfiguring them into a u-shape. Then a table was brought down to the floor, so the minister could be on the same level as the congregation.

"Because of the changes, people could see better, use all their senses, and experience worship in new ways," said Arnold.

Two white rugs were placed in the middle where children could sit and get an up-close and personal look at what was going on. In addition to the reorganization of the pews, the service was restructured as well.  Sermons were shorter and more physical objects were used.

"We wanted worship to be very kid-friendly, and we didn't want parents worrying about their children's behavior, so we provided theme-appropriate items to keep the kids engaged.  For example, nets were used for a sermon on 'put down your nets and follow me.'  During a Sunday when water and Baptism were the theme, Aquadoodles (activity toys that allow the user to make art with just water) were provided and water-related items were placed on the table.  The children watched and listened to the pastor with great interest because their experience was more intimate than usual.

"I loved the feeling that the children were itching to play the instruments and take the offering and seeing the 'random' adults sitting with them and enjoying them," said one member.  "I liked the fact that my 10 year old was more comfortable and engaged in the worship service than he's ever been," said another.

Arnold admits that a lot of planning and a lot of work were needed to make the program a success.  And she also acknowledges that there was one complaint from a parent who thought the children learned more in class than in the worship service.  But Arnold disagreed.  "Both the children and adults learned two very valuable lessons," she explained.  "The first lesson learned was that worship is for everyone.  And the second is that church honors and welcomes children."

Arnold said:  "We set the Holy Spirit free - we unbolted the pews and turned them to face each other; we did away with bulletins and hymnals; children sat on the floor and wandered the room; sermons were short and illustrated with altar objects.  It was joyful and chaotic.  Even those who were less than enthusiastic found the Holy in new ways."