SPOTLIGHT: What Are All Those Animals Doing on the Front Lawn?

SPOTLIGHT: What Are All Those Animals Doing on the Front Lawn?

The Bible does not specifically say how long it took Noah to build the ark and fill it with animals, but The Franklin Federated Church can tell you it will take a little less than a year to build and fill theirs.

Two members of the Missions Team and two members of the Christian Education Team formed a committee dedicated to buying an Ark for Heifer International. Heifer's mission is to work with communities to end hunger and poverty and care for the earth.  According to their website, with gifts of livestock and training, they help families improve their nutrition and generate income in sustainable ways. They refer to the animals as "living loans" because in exchange for their livestock and training, families agree to give one of its animal's offspring to another family in need. It's called Passing on the Gift – a cornerstone of its mission that creates an ever-expanding network of hope and peace.

Nancy Ross, Chair of the Missions Team, explained that the Ark Committee set a goal of two years to raise enough money to purchase an Ark for Heifer – which costs $5,000.  Although Heifer’s animals can be ‘purchased’ for as little as $20, by donating the $5,000, members of Franklin Federated will provide 15 pairs of animals, including cows, sheep, camels, alpacas, oxen, water buffalos, llamas, goats, pigs, rabbits, angora rabbits, flocks of geese, ducks, chicks, and honeybees. 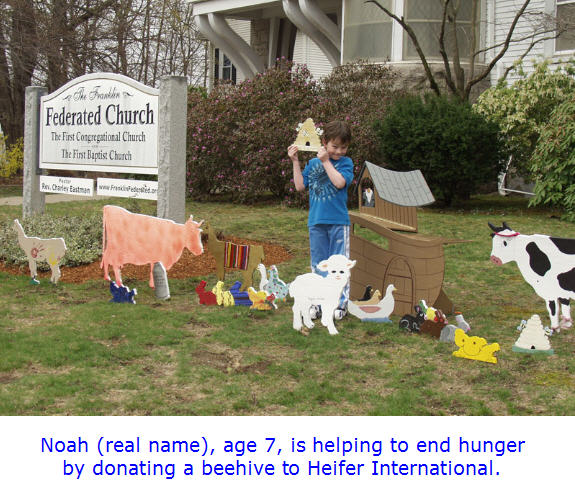 The Ark project was jumpstarted last summer with a Read to Feed® project.  The church school children asked church members, family members, and friends to sponsor them in their fundraising.  Some people donated a certain amount of money per book read, while others donated a flat fee.  Over $1,500 was raised.  Other programs included collecting quarters in a Heifer cardboard bank, selling t-shirts, and taking a fun and educational field trip to Overlook Farm, in Rutland, Massachusetts, which features a Heifer Global Village, gardens, and animals.

However, the biggest source of revenue was raised through the purchase of wooden animals.  The Ark Committee approached Don Goddard, a member who was known for his woodworking skills, and asked for his help.  Goddard cut out of plywood somewhat smaller than life-sized animals representing the 15 pairs of animals needed to fill the Heifer ark.  People were then invited to purchase the wooden animals (at Heifer’s suggested donation cost), decorate them – realistically or not – and place the wooden animals by the standing ark structure that Goddard also built and placed on the church’s lawn.

“This got a lot of people involved,” said Ross.  “Animals were purchased by individuals, families, and groups of people who combined their donations so they could purchase a specific animal. The Ark Team donated a heifer, the Missions Team donated a water buffalo, and the Women’s Group bought a water buffalo as well.” Some people even purchased animals as Christmas gifts.

Peggy Maxwell, an active member and part of the Ark Committee, said the wooden ark program is a very concrete way to show people, including young children, how to help hungry people.  “My grandson bought a chicken, and with his mother’s help, painted it and placed it in front of the ark on the lawn.  The menagerie makes quite a scene out there, but it has also made an impression on the whole family.  It shows how you can help people in the world help themselves.  It’s a contagious idea and I enjoyed the enthusiasm of the children and the adults.”

The rainbow-painted cow, animals covered in colorful handprints, and the ‘hippy’ goat were just a few of the eye-catching animals grazing on the church lawn. “We heard from many people in the community who wondered what the scene was all about,” said Ross.

“It is very visual,” said Maxwell.  “And it was a constant reminder of what we are trying to do as Christians.  Children love animals, and my grandson responded to the whole message.”

Colleen Hughes-Paterno, Chair of CE and member of the Ark committee, was quite impressed by how well the children took to the program. “For CE it was all about learning about hunger and the way Heifer goes about helping to end hunger.  This was a fabulous idea to help get the message across,” she said.

The Committee is planning to have a wrap up celebration on Children’s Day, and they are still taking suggestions as to what to do with the wooden animals when the ark has been completed.  Some have suggested having the donors keep their animals, or putting them in the church playground, or even leaving a few on the front lawn as a reminder of Heifer’s message.

Wherever they end up, those Heifer animals have made quite an impression.  Whether it’s meat for eating, strength to plow fields, milk for nutrients, wool for warmth, or goods to sell and sustain life, the members of Franklin Federated have given gifts that will change the lives of hardworking poor families, who can then pass on the gift, changing even more lives forever.

You can contact anyone from the Ark Team at the church office at 508-528-3803 or office@franklinfederated.org.